Last week saw the first ever Radio Times Festival take place on the Green opposite Hampton Court Palace. I have to say it was a slightly odd affair, overall. Between Thursday 24th and Sunday 27th, there were plenty of events to go to, but you had to buy tickets individually for each one. Given that each hour-long event typically cost £12-£18, you could quickly bankrupt yourself going to all of them.

However, I didn’t, thanks to a bit of odd scheduling. I’d have been a shoo-in for the:

Except that was on Friday. When everyone is at work. The most I could have done is try to scramble down in the evening (1h-2h by train) and then scramble back again.

So instead, we were on the Saturday there purely to see Philippa Gregory discuss her new book The Taming of the Queen and slag off Wolf Hall (not Wolf Hall). That clashed with the Endeavour chat, unfortunately, and lovely wife didn’t fancy hanging around for the Lynda La Plante/Tennison session, which meant that we ended up only going to one thing. That saved some cash at least.

However, despite that weird scheduling, it was actually pretty decent. The weather was great, it wasn’t too packed, everyone was well behaved, it had possibly the most middle-class mobile restaurants imaginable (admittedly full of very tasty food) and Dick Fiddy from the BFI was around, too.

I took a few photos while I was there and you can look at them after the jump. I have to admit my photo of Boycie from Only Fools And Horses wasn’t the best, though. And if you want to see sophisticated, wait till you see how Philippa Gregory herself overcame the lack of live streaming at the event.

The bigger ITV Experience, where you could watch ITV shows on mounted iPads:

Philippa Gregory reading from her latest book. Ironically, the painting behind her that she’s discussing had actually been relocated out of Hampton Court to Buckingham Palace and won’t be returning for a fortnight. 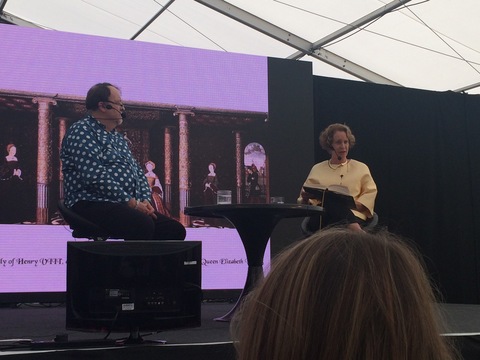 Philippa Gregory being live-streamed using her own iPhone*

Review: Doctor Who – 7×2 – Dinosaurs on a Spaceship

A review of Doctor Who, Dinosaurs on a Spaceship

Four minutes of The Runaway Bride

Four minutes of The Runaway Bride
[…]

Liz Shaw’s Best Bits: Doctor Who and the Silurians