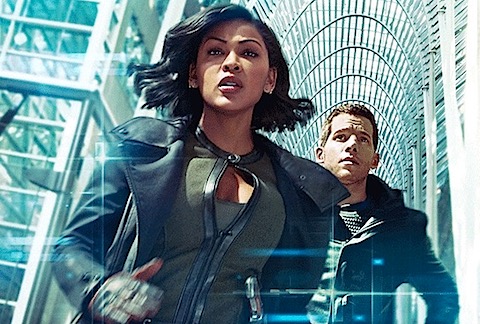 Ah, movie spin-offs. How I miss them. There used to be a time when the airwaves were crammed with them. But ever since film became the lesser cousin of TV and TV decided books, comics, other countries’ TV and – heavens to Murgatroyd – original ideas were better than two robots hitting each other, film adaptations have been hard to come by.

As nostalgia-tinged as that last paragraph was, now I think about it, most movie spin-offs were dreadful, tepid versions of their source material, adding nothing original and being content to merely spread everything good about the movie thinner and thinner over multiple episodes.

Why am I thinking about it? Because now we have a spin-off of 2002’s Minority Report, a pretty good Tom Cruise/Steven Spielberg flick based on a Philip K Dick story about future cops who have access to a group of psychics who can predict the future and stop crimes before they actually happen. Set a decade after the original, the series sees one of those ‘precogs’ trying to prevent crimes by himself but failing – until he teams up with a cop tired of turning up after crimes have been committed and wanting to make a different kind of difference.

And this new series is as uninspiringly bland as all those previous movie spin-offs.

About
Set in 2065 Washington, D.C. (eleven years after the events of the 2002 film), the series will follow Dash (Stark Sands), a Precog, who has the ability to predict crimes. Unfortunately, the Pre-Crime Unit was dismantled in 2054, forcing law enforcement to rely on newer methods to fight crime. Before it was dismantled, Dash, his twin brother Arthur (Nick Zano), and their foster sister Agatha (Laura Regan) were part of the programme that gave them their unique gifts.

Now, Dash is using his ability to assist Detective Lara Vega (Meagan Good) in preventing crimes, at the same time seeking out his missing twin and trying to keep his gift from being revealed, as there are those who want to obtain the precogs at any cost.

The most interesting aspect of the show is that following last year’s discovery by Fox that straight, white men weren’t the only potential audiences for TV shows or even the only people who could appear in TV shows, here we have a future in which an entire police department is seemingly run by minorities. Given white people will be in the minority in the US by 2065, this isn’t science-fiction but it is novel for Fox.

Which is why – perhaps with the help of the always conventional Amblin Entertainment – just like with Terra Nova, Touch, Almost Human, The Sarah Connor Chronicles, Dollhouse and pretty much every other Fox science-fiction show before it, this is very much a normalised slice of diversity.

Yes, there’s a black, female lead (Meagan Good) and she basically has Tom Cruise’s role. But she has to have a big family and be a single parent with a young son to look after, and it’s her swimsuit pictures that accidentally end up plastered over the walls, not anyone male’s. The Chinese woman who dresses quirkily has to be the computer specialist. The Latino guy has to be proud and sullen. And although the Samantha Morton precog (now played by Laura Regan) was the co-star of the movie, here the focus is on the two white, male precogs, one of whom (Stark Sands) is the driving force of the narrative.

So better for Fox, but still not as daring as it could have been.

There’s also not much by way of innovation. Seen the movie? Then you’ll have seen all the predictions this show has for the future but executed better, despite having the movie having the CGI of 13 years ago, which might as well have been seven Commodore 64s for all it was worth. Perhaps its one contribution to future-gazing is instead to look back from the perspective of the future to comment on current events (“Back when I was young, people used to meet each other on something called ‘Tinder’,” a grandmother nostalgically reminisces.)

The show’s one real saving grace is Sands and his character. While Good has thankless running around to do in spades, it’s Sands’ quirkiness and unsocialised naïveté that give the show a modicum of charm, as he tries earnestly to fit in, without knowing how.

But to be honest, if you were expecting to tune in to watch something with even half the innovation or excitement of the original movie, let alone the original Dick short story, you’re going to be sorely disappointed. Interested in an unchallenging family sci-fi show about cops that you can watch with your kids? Then you might have a winner on your hands.