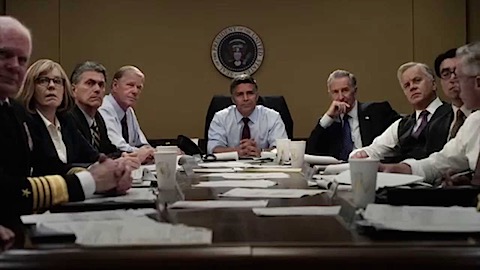 There’s been a long tradition of black comedies about the potential start of World War 3, typically by accident. Think Dr Strangelove, Whoops Apocalypse or even In The Loop. They are among our darkest and finest satires of global politics and our mutual insanity.

The Brink is not.

HBO’s latest comedy may have a fine cast that includes Jack Black, Tim Robbins, Aasif Mandvi, Meera Syal and Pablo Schreiber, and have Jay Roach sitting in the exec producer’s chair, but The Brink is not a classic anything. It’s occasionally funny, but you’ll spend more time wincing and thinking, “You guys really don’t know much about international politics, do you?” than laughing.

The set-up is relatively simple: Pakistan undergoes a military coup, putting into power a mad general (Iqbal Theba) who wants to destroy Israel. I say mad and indeed lowly State Department employee Black, who spends most of his time trying to score weed from street dealers with the help of Mandvi, discovers that Mandvi’s uncle (Erick Avari) was Theba’s psychiatrist and actually diagnosed him as paranoid schizophrenic. The fact that Theba also thinks that US drones are a Zionist plot to sterilise Pakistanis using electromagnetic radiation kind of supports that diagnosis.

Back in the US, the Asian-prostitute addicted Secretary of State Robbins is busily trying to stop president Esai Morales (Jericho, Vanished, Caprica) from bombing Pakistan in response, something not being helped by the drug-addled US fighter pilot (Schreiber) tasked with the mission.

As you may have guessed from all of that, the show’s best suit isn’t subtlety, and much of the humour is broad to say the least, right down to high-ranking officials complaining to the president that ‘he started it’ after having their ‘f*ck you – no, f*ck you – no…’ fight broken up. Some of it works, some of it doesn’t.

The show’s candour that maybe not everyone involved in the US military or politics is 100% noble, talented, brave, etc, is also refreshing – although not as refreshing as Veep or Enlisted say. Equally pleasing is its clear message that yes, while everyone involved is a f*ck up, they still get the job done so maybe we shouldn’t have unrealistic expectations of perfection from people. Robbins, in particular, is someone who clearly knows what he’s talking about… once he’s been helped out of his bondage gear.

The show also tries to play on American racism, satirising Americans’ lack of linguistic skills and expectations that Pakistanis would all live in mud huts rather than live in houses, go to university, have professional jobs, etc. The show’s Mexican-American creators Kim and Roberto Benabib (Weeds) grew up in Mexico City, so at least have an international perspective, and with a cast of mostly Indian-Americans and Indian-Brits involved, it often does a good job of chastising America, although the fact they’re Indian- rather than Pakistani- means that it doesn’t feel very Pakistani and often feels like a bunch of Indians chastising their neighbours, too.

Indeed, the show’s biggest problem is that ‘Pakistan’ has far more in common with both Iran and Afghanistan than the actual Pakistan, with Theba more like Mahmoud Ahmadinejad, say.

All the same, the show does have some promise, feeling at times like what Dr Strangelove would have been if it had been made by one of the men behind Austin Powers, and some of the jokes do actually land on target. It’s not a great replacement for either Veep or Silicon Valley in HBO’s Sunday schedules, but you could do a whole lot worse.