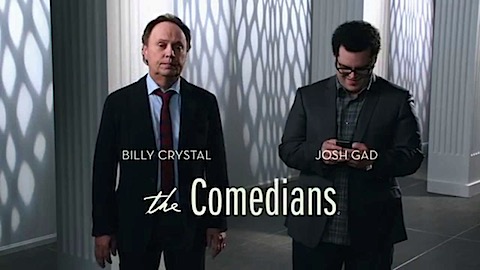 In 2015, FX commissioned a sketch show from comedians Billy Crystal and Josh Gad. Billy Crystal wasn’t too happy about this but the network wasn’t going to commission it without Gad, so Crystal went along with it. Surprisingly enough, the entire process of commissioning the series, creating and filming the pilot, as well as making the series was filmed by a crew, who also filmed Crystal and Gad’s personal life at the same time.

None of the above paragraph is true, but that’s the basic premise of FX’s The Comedians, which is based on Sweden’s SVT’s Ulveson And Herngren.

The conceit of the show is that Crystal and Gad are playing versions of themselves, Crystal the OAP Jewish comedian with the big ego and back catalogue, Gad the equally egotistical upcoming young comedian who wants to be big with the Latino, black and Filipino audience, and whose frequent use of the phrase ‘suck his dick’ doesn’t endear himself to Crystal.

Indeed, nothing Gad does in the first three episodes pleases Crystal, whether it’s trying to bring in his own director after Crystal fires Larry Charles (played by the real Larry Charles) or intruding on Crystal’s wife (Dana Delaney, not playing herself) when she’s naked, and that’s where a lot of the intended humour comes in. The rest of the humour largely comes from the two comedians’ narcissism, with Crystal dropping in names, awards, etc, at the drop of a hat, Gad mentioning Frozen and Book of Mormon every chance he gets, complicated by the fact most of the people around them are too young to get Crystal’s references, and the fact Gad seems more proud of 1600 Penn than anything else.

There’s also the usual young v old tropes, with Gad constantly on his phone surfing the Internet, more cameos from other stars such as Will Sasso, a transgender director (Steve Weber from Studio 60 et al) and general cringe comedy.

The trouble is that very little of this is very funny and has largely been done better in both Extras and Episodes. It relies on jokes going wrong, knowing a reasonable amount about both Crystal and Gad, finding people stoned funny, finding people offended and embarrassed funny, finding Crystal and Gad hating each other funny, and more, none of which it should rely on. Where it does venture into jokes with the supposed sketch show, even then, it’s still not funny.

I’ve tried three episodes and I’m out now. But humour’s subjective so you might want to give it a try. However, even with two types of humour, it still missed me.

Barrometer rating: 4
Rob’s prediction: I’ll be surprised if it lasts more than a season, but you never know.