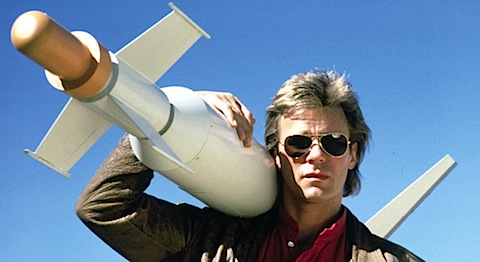 There are few TV shows that have actually changed the English language, but ABC’s MacGyver gave us not only a new verb, but inspired virtually an entire generation of viewers to start carrying around Swiss Army Knives.

Starring Richard Dean Anderson as the eponymous Angus MacGyver, the show was created by three men: Lee David Zlotoff, one of the producers of Remington Steele; Emmy-award winning director John Rich; and Henry Winkler – the Fonz on Happy Days. It saw Anderson’s former Vietnam bomb disposal expert turned secret agent working first for the US government’s Department of External Services and then for the private sector Phoenix Foundation, investigating all manner of dangerous subjects both professionally and personally.

So far, so ordinary. What then set MacGyver apart from other action heroes?

Here, let the title sequence give you all three of these things in a concentrated burst:

Winkler and the show’s other producers went to great lengths to ensure that MacGyver’s STEM tricks were all plausibly true (albeit needing a great deal of luck to pull off, a lot of the time), and over seven seasons, MacGyver’s activities were sufficiently engrossing that teachers were using the show to try to excite their pupils about their subjects’ potential. And just as Hitchcock’s ‘McGuffin’ entered the English language, so did the verb ‘to MacGyver’, meaning to improvise an impossible solution to a physical problem using various bits of miscellany.

The show ran for seven seasons, was followed by two TV movies, and there was even a parody Saturday Night Live character MacGruber who got his own movie. MacGyver himself was the fixation of Selma and Patty in The Simpsons long after the show was cancelled. And while attempts to do new series and even a ‘son of’ series have failed, there’s now a comic you can read and MacGyver can often be spotted in commercials.

But I’ll leave you with this sequence from a somewhat infamous episode of the show. Need to do an epic car chase involving a bit of MacGyvery technical wizardry? But you need to do it on a TV show budget? Then why not knick a big chunk of a famous British movie? See how long it will take you to work out which.