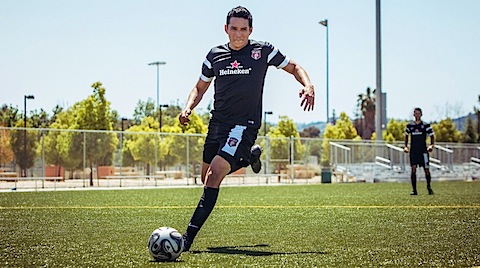 There is something of a stereotype in the US that there’s only three groups of people who play what the rest of the world calls football/le football/Fußball/ποδόσφαιρο/etc but which America calls soccer:

‘Real men’, on the other hand, play what the US calls football, but the rest of the world calls American football.

Now, the World Cup this year, at which the US did surprisingly well, might have helped to start the slow process of neutralising this stereotype. But film director Robert Rodriguez made his career playing with Latin stereotypes in films such as El Mariarchi and From Dusk Till Dawn and with grindhouse homages such as Sin City, Machete and, erm, Grindhouse. Given that Rodriguez now has his own English-language, Latin-interest, pro-grindhouse TV network, El Rey, it’s no big surprise therefore that his second scripted drama, which follows hot on the heels of the TV adaptation of From Dusk Till Dawn, should capitalise on that stereotype.

Matador is a partial grindhouse homage about an undercover DEA agent (Gabriel Luna) who gets recruited by the CIA when they spot he’s not only quite good at undercover work, he can also run very quickly. Luna’s task? To somehow infiltrate LA’s professional football team, run by Alfred Molina, to uncover a global conspiracy.

By turns Chuck-like then Escape From Athena ridiculous, Matador is unfortunately only moderately exciting and, it has to be said, is full of immigrants. Brits and Australians. There’s just loads of them.

About
Tony Bravo, a DEA agent from Boyle Heights, is recruited by a little-known branch of the CIA for a top-secret mission: investigate the LA Riot—a professional soccer team—by going undercover as one of their players. Tony will need the espionage skills to impress his handlers and some fast footwork to make the team, or The Beautiful Game could end in sudden death. Is Tony in for the win?

Is it any good?
Despite having Roberto Orci co-writing the script and Rodriguez himself directing the first episode, this is unfortunately just like every other Rodriguez work you’ve ever seen: edging close to something greater but still always underwhelming. Whether it’s fight scenes, dialogue, chases, torture, shootouts, Mexican stand-offs, montages or anything else, Rodriguez is always homaging something else better but never ever achieving something great himself.

The show is a conglomeration of stereotypical Latino wish fulfilments: the handsome blue collar guy from the poor part of town, who’s actually a smart, sophisticated undercover spy as well as a professional footballer? The show knows it and owns those stereotypes, but then doesn’t actually do anything good with them.

There are a few amusing zingers between Luna and his CIA handlers, Nicky Whelan (Neighbours) and Neil Hopkins (Lost), that do at least redeem the show slightly. Unfortunately, Whelan and Hopkins fulfil pretty much identical functions to those performed by Whelan’s fellow Australian Yvonne Strahovski and Adam Baldwin back in Chuck, except if Adam Baldwin were a bit more like the entire cast of Reno 911. In fact, you could take pretty much any season 1 episode of Chuck and you’d pretty much be able to match, scene-for-scene, most of the spywork in Matador. Sophisticated party? Check. Slip drug into drink? Check. Investigate inside house? Check. And so on.

There’s also a good supporting cast here, including Molina, Elizabeth Peña (Jacob’s Ladder, Modern Family) and Tanc Sade. However, Molina, despite his Spanish parentage, doesn’t sound even slightly convincing as a Latino telecoms mogul, while Sade is another Australian, here playing an English footballer using the same iffy accent almost all Australian actors use when playing anyone English. However, given he’s a record-holding diver, he does at least have the physicality for the part.

Nevertheless, the grindhouse side of things does reduce the show, not lift it up. There’s some very dodgy, borderline underage things going on with Molina’s daughter (Yvette Monreal), including a near-rape. And any time anyone from outside the US shows up, they end up being insulting national stereotypes, whether it’s Sade being louche and effete, a German bad guy droning on about the ‘purity of the bloodlines’ and playing around with a wurst, a Slavic footballer who just growls and assaults other players, a dedicated European football fan who tortures people or Molina’s assistant (Louise Ozawa Changhien), who (and I quote) “is an intimidating, creepy 20-something Asian man with bleached hair, a pierced eyebrow, and a quasi-punk-rock aesthetic that puts him out of step with much of Galan’s well-heeled crowd. A criminal errand boy for Galan in charge of murders and assorted kinds of evil courier work, Samuel is silent but deadly.”

For all the attempted fun, the racism leaves a sour taste in the mouth.

I can’t really recommend Matador to anyone. While there is some obvious value in the novelties of a Latino lead and a US show about (proper) football, as a spy show it’s very derivative, the football is at best okay, the action is merely diverting and its attitudes are borderline offensive. It’s going to need a lot of work to make it a fixture in anyone’s calendar.