When you’re doing a supposedly international show, it can be quite important to get local information correct when you ‘go overseas’. Who you offend or annoy is going to vary, depending on what you get wrong. If you simply film somewhere that looks nothing like a well known place, then you’re going to have the piss taking out of you mercilessly by pretty much everyone.

On the other hand, if it’s a subtle detail, not only are you liable to miss it yourself, probably few people who aren’t native to that land are going to notice but those natives could well be mightily entertained by your cluelessness. Case in point: Agents of SHIELD, which recently went to the UK to visit… 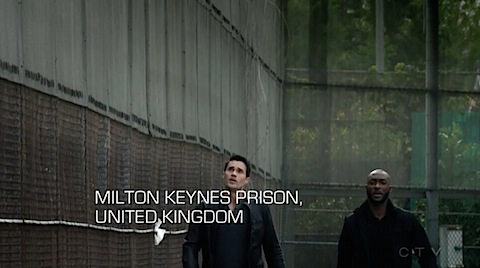 …’Milton Keynes Prison’. Now, there is a prison in Milton Keynes – HMP Woodhill – although it looks nothing like the one shown on Agents of SHIELD.

As Neil Gaiman and Terry Pratchett wrote in Good Omens:

Note for Americans and other aliens: Milton Keynes is a new city approximately halfway between London and Birmingham. It was built to be modern, efficient, healthy, and, all in all, a pleasant place to live. Many Britons find this amusing.

Of course, this will have passed over the heads of 99.9% of Agents of SHIELD’s ever-diminishing American audience. Over here, I suspect there’ll be a few titters when the episode airs.