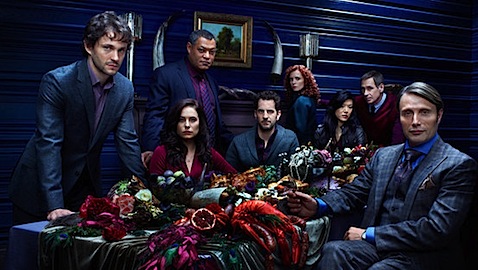 NBC has a ‘born to lose’ tattoo somewhere on its corporate body, doesn’t it? It just doesn’t want to do well in the ratings. Here’s a perfect example.

Tonight’s episode of Hannibal has been pulled from the schedules in the US at the request of show runner Bryan Fuller, because the story involves children being brainwashed into killing other children and that’s a bit too much like the Sandy Hook shooting back in December or something – although, apparently, it’s okay to have adults tortured and/or killed every week on TV, so the rest of the series is going ahead.

So instead of tonight’s originally scheduled episode, NBC is going to show the next episode. How can that be, you might ask, given that Hannibal is a serial and we’re busily watching all kinds of relationships develop? Aren’t we going to lose out on some important details?

Don’t worry, NBC has your back. In case you were planning on watching tonight’s episode and actually want it to make some kind of sense, Bryan and NBC have stripped out from the missing episode all the bits that involve children being mean, and converted the rest of the episode into five webisodes that further the serial nature of the show.

Yes, I can’t see anything going wrong here at all, can you? Viewers outside of the US will, however, get the full episode in the correct running order. Except Canadians, who also got Coquilles last night rather than Oeuf.

Webisodes after the jump, but they’re only viewable in the US, I’m afraid (unless you happen to be a user of Tunnelbear, for example). Also, no one in the NBC online department can speak French, so they’ve called the webisodes Ceuf rather than Oeuf. Or maybe that’s short for Cannibalised Oeuf.

Oeuf – Part 4
Dr. Lecter encourages Abigail to face her past.

What have you been watching? Including Humans, Tyrant, Jodorowsky’s Dune and Jurassic World

What did you watch this week? Including Game of Thrones, The Hangover 3, Hannibal, Continuum and The Fall