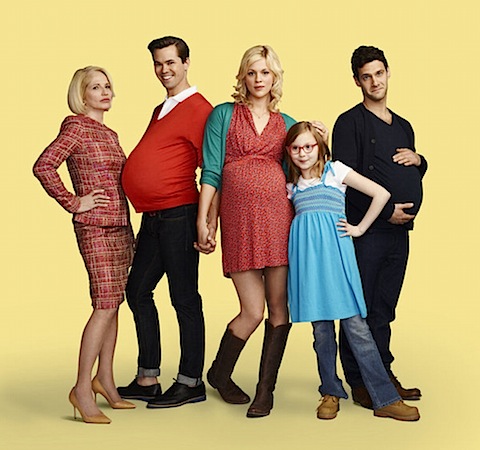 Funny how if you’d stuck those two words together in the 90s, you’d have got gold, thanks to Friends, and how if you stick them together now, despite Community and 30 Rock, you get lead. Certainly the viewers seem to think so, judging from the ratings.

In fact, ABC is largely the network to watch if you want to see something that’s actually funny, thanks to both Modern Family and Happy Endings. So what better network for NBC to emulate with a new comedy than ABC. Of course, being NBC, it’s done it all wrong.

The New Normal is the unwanted answer to the pointless question: “What if we created a sitcom based around the gay couple in Modern Family and how they adopted their baby? Except if we made them even more stereotypically gay and less interesting, and added a bland surrogate mother based on Anna Faris’ character in Friends?” Starring Justin Batha of The Hangover, Scottish actress Georgia King from Jane Eyre and The Book of Mormon‘s Andrew Rannells, it pulls off the miracle of being both inoffensive and offensive, practically its sole redeeming feature apart from a slightly intelligent script being Ellen Barkin as King’s bigoted grandmother.

Watch the trailer and see if you laugh.

Plot
Bryan (Andrew Rannells) and David (Justin Bartha) are a happy Los Angeles couple, with successful respective careers. The only thing missing in their relationship is a baby. They meet Goldie (Georgia King), a single Midwestern mother and waitress, who has moved to L.A. with her eight-year-old daughter Shania (Bebe Wood). Jane (Ellen Barkin), Goldie’s grandmother, follows her family to the city against her grandaughter’s wishes. Goldie decides to become Bryan and David’s surrogate, which includes her family.

Is it any good?
There is a station in Utah, an NBC affiliate that has a habit of publicly slating new NBC shows as morally repugnant and liable to destroy the nation. It did it last year with The Playboy Club and it’s done it again this year with The New Normal. I have this theory that NBC tells it to do this in a marketing gamble, figuring that nobody in Utah would watch the shows anyway and there’s no such thing as bad publicity, particularly when it might get the salacious or liberal elements of society to watch in counter-protest.

Trouble is it doesn’t work. No one watched The Playboy Club, even though it was actually okay and not what everyone thought it was, and I doubt anyone’s going to watch The New Normal, or if they did, they’ll give up after about 10 minutes.

Because The New Normal is boring. It’s not funny, although it can be clever. Despite wanting to be pioneering and to give us an actual male gay couple in a gay relationship in primetime, it’s chosen to give us a brain-dead, effeminate, fashion-forward gay stereotype and a smarter but still effeminate gay stereotype as the couple – it wants to fight homophobia but still be homophobic. Because just being gay is funny, isn’t it? Because they’re so camp, the gays, aren’t they? All of them. Every single one.

This tendency is most evident in Ellen Barkin’s character, who provides the show’s few solitary laughs, mainly thanks to her racism, homophobia and other bigotry (where did we last see her being this good? Oh yes. Modern Family. Funny that), which achieves almost poetic proportions.

Meanwhile, back in Stereotypes Corner, we have Georgia King’s blonde former teen mother from the Midwest deciding the best way to make something of her life is by having a baby for someone else. She wants to go to Law School because she’s seen The Good Wife and she wants to be able to use long words. And fashion-forward gay has a black assistant who’s sassy and in your face.

As you can probably tell, this isn’t smart comedy. In fact, smart comedy is explicitly the exact opposite of what NBC wants to fill its schedules with, so by the score, The New Normal is a success.

To defend itself against charges of bigotry, The New Normal is filled with feelgood phrases about how everyone’s the same, all that matters is that children are raised by loving parents in a loving home, and so on. King’s entirely family history is an obvious depiction of what can go wrong in ‘normal’ (i.e. heterosexual) relationships, from unwanted pregnancies through to abandoned partners and mothers that abandon their children. Unless you’re a complete homophobe – in which case, you won’t want to watch this – you’ll see that option a (two loving gay dads) is easily better than option b (absent/cheating/stupid heterosexual parents). It also helps that gay dads are rich, because poor parents are just the worst, aren’t they? So watching The New Normal is like a great big pat on the back by rich liberal viewers to themselves for being so liberal as to watch it, knowing that conservatives are bigots and haters and won’t be watching. They may even keep watching to get that pat on the back for being so liberal and right-thinking every episode, even though it’s not actually funny or enjoyable.

Or at least that’s probably the theory.

It’s a shame, because Ryan Murphy and Ali Adler (both openly gay and both openly producers of Glee) are usually reasonably reliable and they’re both smart writers. The script does have have clever lines and there’s a lovely little scene where a bunch of incidental characters describe their abnormal lives and how abnormal is the new normal – if the show had been about those characters, I’d have carried on watching.

It’s just that Murphy and Adler written something that’s dumb, unfunny and lazy, because the show is just so Right, so Correct Thinking, that why should it have to be entertaining as well? People should just watch it anyway.

So even though you should watch it, because it is so Right, I can’t recommend that you do watch The New Normal, because it’s wrong. Paradoxical, I know, but if you’d just stopped at the words NBC and Comedy, you’d have known the show wasn’t any good and you wouldn’t be in this dilemma, now would you?

London falling, The CW’s Perfectionists and Andrew Dice Clay is on The Blacklist

Question of the week: what was the best TV show or movie you saw in 2010?