In the UK: Tuesdays, 9pm, BBC2. Available on the iPlayer

Well, if I’m going to start watching UK dramas again, I guess BBC2 – and a drama written by Jed Mercurio and starring the wonderful Lennie James (from Jericho et al), no less – is a good place to start. Line of Duty is a police complaints procedural that looks at an investigation into a top cop’s apparently spotless, amazing record to see how he manages it. Along the way, we get to see how the Met now deals with complaints – both officially and unofficially – while watching the police investigating themselves in a (to use a cliché) game of cat and mouse.

And while it’s actually pretty good, there’s a faint whim of the ridiculous throughout, to the extent you’re sometimes not sure whether it’s being serious, being deliberately funny or is simply having trouble taking itself seriously.

Here’s a trailer followed by the first four minutes or so. You’ll see what I mean about not knowing whether it’s supposed to be ridiculous or not from the the second video.

END_OF_DOCUMENT_TOKEN_TO_BE_REPLACED 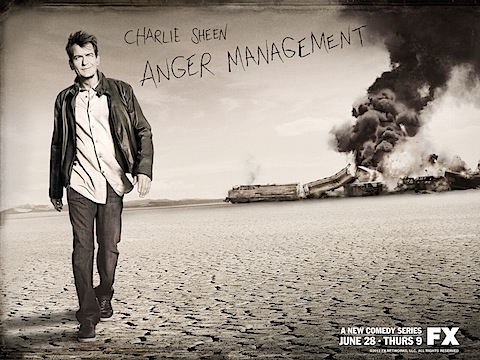 Charlie Sheen seemed dead certain to be going for option a. After a catastrophic public meltdown that saw him chucked off Two And A Half Men, one of the US’s top-rated comedy shows, he seemed to be going pellmell towards even further collapse. And then…

…he signed up for Anger Management, an FX sitcom. Well, surely that was going to be like petrol to a forest fire – an even greater disaster in the making.

Except not. Anger Management is a fairly traditional sitcom in which Charlie Sheen plays Charlie, a former baseball player turned anger management therapist who has some – but not much – difficulty dealing with his patients, another therapist (Selma Blair) who is also his best friend with benefits, his ex-wife and his daughter, as well as dating in general.

And while there are a couple of meta-moments about his firing from Two And A Half Men at the beginning of the first episode and while in many ways this is the same womanising Charlie of that sitcom, this is not the Charlie Sheen you might have been expecting. This is a Charlie Sheen who can talk coherently, intelligently, sensitively about issues and resolve them like an intelligent adult.

Boy is it dull, even if FX is trailing it as something of train wreck. It seems Charlie Sheen went with option b.

END_OF_DOCUMENT_TOKEN_TO_BE_REPLACED

So the news broke last week that Martin Scorsese is going to abandon film to shoot his movies digitally from now:

Thelma Schoonmaker, an editor who has worked with Scorsese for 40 years, said: “It’s just impossible to fight it anymore, the collapse of film,” before adding: “Marty and I are very depressed about it. It would appear that we have lost the battle.”

It’s worth reading the rest of the article I’ve just quoted from because Schoonmaker says that 3D is the driver for the move and smaller cinemas are being devastated by it. She also makes the point that older films are no longer having prints made and that digital media need to be constantly upgraded (cf the BBC’s Domesday Project).

Of course, film decays, too, and there are many films from the start of the 20th century that are in urgent need of restoration or that have decayed totally. Digital, provided it’s in a format that has mass appeal and provided there are decent back-up and migration strategies, could theoretically continue in perfect condition for the rest of eternity (although future archaeologists might have trouble understanding the formats in a post-apocalyptic wasteland, something that isn’t true of analogue media. Assuming you’re planning for that eventuality).

Digital also has other advantages: it’s cheaper to shoot with, requires much lighter equipment, allows for 3D ‘filming’, can be edited quickly without the need for an intermediate digitisation process – almost no one actually edits with film anymore – and can be downloaded to as many cinema projectors as you like, almost instantaneously, unlike film, which only supports a limited number of prints, which have to travel from cinema to cinema around the world like nomads. You can also back up digital and it’s virtually immune from defects.

Others, however, argue that the look of film is something that digital struggles with: the harshness of the picture quality in Michael Mann’s Collateral compared poorly with his previous films’ greater depth, for example.

So today’s question is:

Is film dead as a medium? Are we right to bemoan its demise since it offers something digital doesn’t or are the advantages of digital so great that we might as well be upset about the demise of the zoetrope? Could we even keep it on, just as there are still niches for black and white movies and film processing?

I’ve been quoted in The Copenhagen Post, no less, on why we love Scandinavian TV in Britain.

This one looks interesting – good cast, great writer, interesting set-up. It’s going to be on Radio 4:

The Golden Age
The Golden Age is a brand new sitcom written by Arthur Mathews (Father Ted, Big Train) and set in the rarefied world of BBC Broadcasting House in the 1930s.

The Golden Age documents the various challenges faced by the BBC’s Director of Programmes, John Tharb (Robert Bathurst) and his strong-willed young assistant Mabel (Vicky McClure), as they struggle with the day to day problems of dealing with the foibles and fragile egos of radio’s biggest stars. This includes managing the sexual ambitions of Ronaldo, the flamboyant band-leader and keeping up the spirits of Roger Eves, the most depressed newsreader in history. And all this is done whilst trying to politely navigate increasingly bizarre orders from the irascible Lord Reith (Ford Keirnan).

Tharb and Mabel face many problems, such as when the police visit Broadcasting House, concerned by the discovery of people dying in front of their wireless sets – what or who could be behind the mystery? Likewise, how does Tharb negotiate his way out of broadcasting Lord Reith’s controversial new pastime: grouse-hunting with artillery guns? And what about that real hot-button topic – how does the 1930s BBC go about making programmes for women?!

To hear the answers to these silly questions and much more, please join us at the BBC Radio Theatre on Tuesday 10 and Wednesday 11 July. Doors open at 7.15pm.

To apply for tickets, visit the BBC Tickets Website.