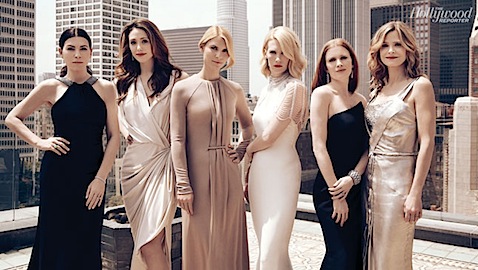 The Hollywood Reporter has some great roundtables with actors and actresses, and since they’ve finally worked out how to give people like me embed codes, let’s take the opportunity to show off their latest roundtable with the Emmy-nominated Claire Danes (Homeland), Emmy Rossum (Shameless), Kyra Sedgwick (The Closer), Mireille Enos (The Killing), Julianna Margulies (The Good Wife) and January Jones (Mad Men).

Yes, January Jones is up for an Emmy this year. No, don’t ask me why.

Did you know that Kyra Sedgwick auditioned for Flashdance? No, me either. This, the full 50-minute interview and the answers to “What was your scariest moment as an actress?”, “Nudity – when is it okay?”, and “Who has influenced your career?” after the jump

Nudity – when is it okay?

Who has influenced your career?

The news for Wednesday 8th April 2009

What have you been watching? Including Y Gwyll, Ground Floor, Thor 2, Gravity and Homeland

What I’ve been watching in the past three weeks