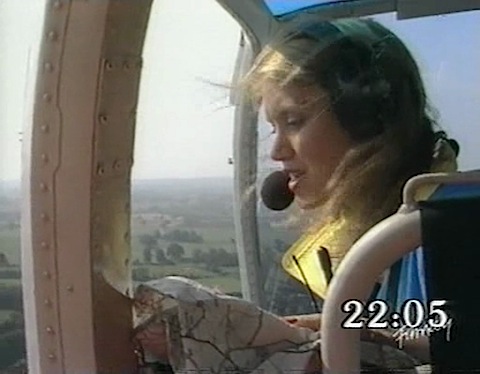 Back in the early days of Channel 4, the urgent need for ideas to fill an entire network full of programming was clear. Despite all the preparation time and work, you don’t just create seven days of year-round programming out of nothing. So, Channel 4 looked around the world for formats it could use.

For game shows, there was a problem: ITV had pretty much sown up the US format-acquisition market, taking everything from Family Fortunes and The Price is Right. So Channel 4 had the interesting idea of plundering French TV for formats.

Like Countdown? Think it’s British? Then gasp in awe at the original show, Des chiffres et des lettres, at 47 years old the oldest TV programme on French TV and one of the longest-running game shows in the world:

In it, a bunch of people back in a studio solved clues that would lead to treasure. They themselves didn’t do the hunting: that was up to a guy in a helicopter who followed their instructions. And here in the UK, with Treasure Hunt we got more or less the same thing, with former newsreader Kenneth Kendall helping a motley collection of contestants back in a studio to solve clues, all while ‘a skyrunner’ went out in a helicopter, usually in the UK, sometimes in exotic locations like Australia, to find the next clue and eventually the treasure.

That skyrunner – Anneka Rice, the possessor of one of the most famous, award-winning bottoms on British TV. Here are the very familiar titles.

Treasure Hunt stayed very faithful to the original French format for almost all of its eight year run. Each week, Rice would go out in her helicopter under the orders of Kendall and the contestants: 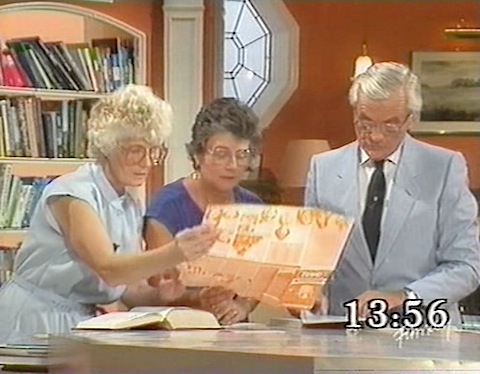 They’d have 45 minutes to find the ‘treasure’, using a whole library of books to solve the clues provided.

Former TV-AM ‘weather girl’ Wincey Willis would act as an adjudicator to make sure everything was above board, occasionally awarding extra time if something had screwed up, such as when a clue got blown away before Rice could find it. There were three clues in all to solve before the end of the programme, and if they weren’t solved and the treasure found, that was it – no prize. But if there was enough time left over, contestants could even go on to try for a bonus prize afterwards.

Most of the attention of the show was focused on the ‘skyrunner’ in her helicopter as she flew around the countryside, filling in gaps in the action with general knowledge and interacting with people, sometimes in staged encounters. The longest-running skyrunner was Anneka Rice whose interaction with Graham, the cameraman who literally followed her everywhere, was part of the show’s appeal. Graham, for reasons not best explained, was very fond of shots of Anneka Rice’s bottom. 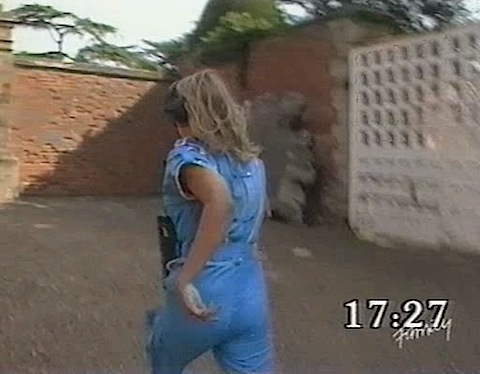 And for most of Treasure Hunt‘s history, Anneka Rice’s bottom was one of the selling points of the show. It even won the rear of the year award in 1986, the same year the show won a light entertainment BAFTA.

However, Rice went on maternity leave in the final series, so former England tennis player Annabel Croft took over from her.

Unfortunately, the writing was on the wall for the show at this point, and ‘guest skyrunner’ Croft proved to be the show’s final skyrunner. However, fuelled by the exciting possibilities of

the show’s production company pitched a similar idea to Treasure Hunt to Channel 4. Interceptor, hosted this time by Croft, saw a bunch of people running around the countryside trying to avoid a helicopter, in this case one flown by ‘The Interceptor’ (Sean O’Kane), who had a laser gun that he would fire at targets on the runners wearing packs of money on their backs. If the runners were hit, that was that and the pack wouldn’t open, but if they survived the entire show, they could open the packs on their backs and keep the oodles of cash. It lasted only one series and if I show you this first episode, you’ll understand why:

Treasure Hunt was briefly revived in 2002 by the BBC, this time with newsreader Dermot Murnaghan presenting, the skyrunner being Suzi Perry. But despite managing to go to exotic locations like Mexico City, it only lasted two series – probably because it’s a lot cheaper to fly around the M25 than Mexico City. It seems that without Anneka Rice and her bottom, a treasure hunt just isn’t a treasure hunt.