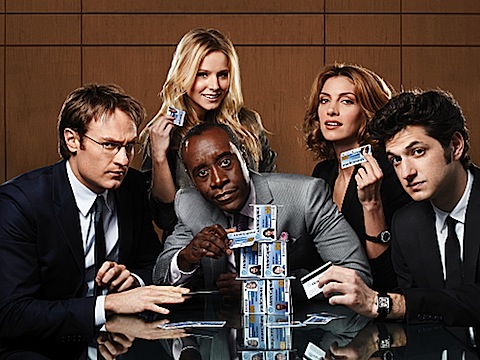 So you want searing, laser-sharp insights into the world of management consultants, do you?
Oh boy do I want them!

Well, let me tell you a few home truths then.
Sock it to me, baby!

Some of them lie.
No, really!

Some of them make it up as they go along and use jargon to baffle people.
You don’t say!

Some of them just tell their clients what they want to hear so they keep getting paid stacks of money.
Well, that’s outrageous! Thank you, revealer-in-bold-of-these-secret-truths.

Actually, did anything RIBOTST just say come as news to you? Probably not. Which is probably why Showtime’s supposedly searing, laser-sharp insight into the world of management consultants, House of Lies, which stars Don Cheadle and Kristen Bell, mostly falls flat.

It’s going through the motions of satire. It’s trying hard to tell us new things. But it’s like a ‘Dick and Jane’ book when everyone’s already gone to college.

Having said that, if you just want a show in which a load of deeply unpleasant people get portrayed as deeply unpleasant and having a mostly crappy life (apart from their vast salaries and jet-setting lifestyles), then House of Lies might have something to offer you. Well, that, misogyny, nudity, topless pole-dancers and lesbian sex in toilets. In that order. Here’s a trailer.

About
Charming, fast talking Marty Kaan and his crack team of MBA-toting management consultants are playing America’s 1 percent for everything they’ve got. They put the con in consulting as they charm smug, unsuspecting corporate fat cats into closing huge deals, and spending a fortune for their services. Twisting the facts, spinning the numbers, and spouting just enough business school jargon to dazzle the clients, there’s no end to what this crew won’t do to and for each other, while laughing all the way to the bank. Starring Academy Award® Nominee Don Cheadle and Kristen Bell, nothing is sacred in HOUSE OF LIES, a hilarious, irreverent send-up of corporate America today.

Is it any good?
Subtle this is not. In fact, it’s a bit like having a Wall Street broker fire off a klaxon in your face.

The action largely revolves around Marty Kaan (Don Cheadle). We get to find out pretty quickly that Kaan is very rich and slightly evil, he has a gender-flexible son, a sociopathic ex-wife (Dawn Oliveri from Heroes) and a whole bunch of variably clever employees at his management consultancy firm including Kristen Bell.

Cheadle, in a Fight Club stylee, talks to camera about his life and job, while the whole world freezes and special-effects for him in the background. We see him go from bed to bed, hitting on and sleeping with woman after woman, talking in phallocentric sports metaphors, going to lapdancing clubs and generally doing all the Wall Street-esque things we hate, while getting paid vast quantities of money for it.

Now management consultancy usually does involve numbers, charts, etc, but that’s left to Bell and two nerdy underlings to deal with. Bell’s character is largely there to do the grunt-work, have someone for Cheadle to explain the plot to and to have a woman who doesn’t automatically sleep with Cheadle – although it’s only a matter of time and she does get up to fun at that lapdancing club. She has no life of her own and her character can best be described as “highly strung high flyer”. And that’s about as much characterisation as she gets. In fact, guest star lapdancer Megalyn Echikunwoke (Nicole Palmer from 24) probably gets more screentime, characterisation and Cheadle-free sex in the first episode than Bell, albeit with another woman.

Women, in other words, get an even worse deal from House of Lies than they do from management consultants.

In the end, the main story ends up being less about boring old company and process restructuring than about PR, and if the show comes to any conclusions about Cheadle’s character and whether to condemn his behaviour, it’s keeping them well hidden. We are supposed to enjoy while condemning, but the enjoyment is a bit thin and the condemnation and insights are a bit 20 years too late.

Overall, while not a total waste of time, this is a waste of the talents of most involved. It does have a few laughs, its methods of story-telling are moderately innovative for TV and its good to have a show more than just one black person in the cast for a change. But it could have been so much better.

PS This is apparently based on a book by the similarly named Martin Kihn. I do hope it’s got more insights than the TV series.