The British sitcom writing team of Andrew Norriss and Richard Fegen had something of a mini-career in the 1980s of subverting the sitcom genre. British sitcoms had been somewhat dominated by farce, with unlikely coincidences, social embarrassment and unwritten rules of social behaviour the cliches that filled the genre.

Although best known for The Brittas Empire, which took all these concerns to their logical (and sometimes illogical) conclusions while simultaneously subverting them, Norriss and Fegen began undermining sitcoms first in 1984 on the then-new TV network Channel 4 with Chance in a Million. The show’s premise was simple: you know all those coincidences and bizarre events that happen in sitcoms and drive the plots? Now imagine a man cursed with such bad luck that that’s what his life is actually like. What would he be like? How would he cope? What sort of experiences would he have? Would he have a girlfriend? And how would she deal with it?

Starring Simon Callow and Brenda Blethyn, then just beginning their TV careers, Chance in a Million paradoxically saw more romantic mix-ups, rugby teams stuck down sewers, wedding rings catapulted into fires, cases of mistaken identity, bank errors and drug traffickers than any sitcom before and since, and is fondly remembered by almost everyone who saw it. Here’s a trailer:

Chance in a Million revolves around the eponymous Tom Chance (Callow), a man fated since birth with the worst luck imaginable. So bad is it that the local police have standing orders not to arrest him for anything, no matter how apparently conclusive the evidence facing them is, because it’s all going to turn out to be some horrible coincidence.

Apart from all that bad luck, Tom is a strange sort of fellow. He doesn’t use pronouns. He can drink a pint in one gulf. He has odd interests, such as an obsession with Surrey and England cricketer Alec Bedser. He’s also surprisingly aggressive and threatens all sorts of people with being punched, despite the obvious risk of mix-ups.

Into his life walks Alison Little (Blethyn). Well, he’s on a blind date to meet a girl who is also called Alison, and Alison has arranged to meet her cousin Tom for the first time since they were young children. Obviously it’s a mix-up. 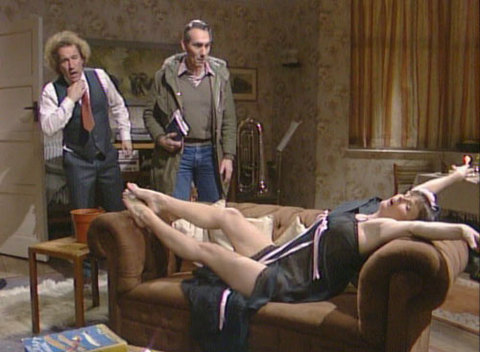 Alison falls for Tom at first sight and while Tom is understandably reluctant to involve her in his bad luck, telling her more or less immediately of his problem, she spends a lot of her time in the series trying to seduce Tom, something she eventually manages – and indeed, eventually Tom proposes to her. Of course, he has to buy seven or eight engagement rings in case of disaster.

Most episodes play like standard episodes of farce, amped up with Tom’s notorious bad luck, with Tom braving everything from being harassed by a tax inspector who thinks he’s having an affair with his daughter through to being followed by reporters expecting a crime boss at his house. Tom goes through this with a combination of irritation, innocence and insight into his condition that allows him to take a more detached view of his dilemmas than most sitcom characters have.

It lasted for 18 episodes and three series before being cancelled and has only recently been released on DVD (which includes, among other things, commentaries from Callow, Norriss and Fegen). Callow says he’d love to do a follow-up series:

I loved doing it and it’s one of the most popular things I ever did. The central character, Tom Chance, was a guy who was plagued by coincidence that was the basic formula of the series. The charming thing about him was that he seemed to belong to another world completely. He spoke in the most extraordinary way, which I think was derived from Mr. Jingle in The Pickwick Papers – he never used the personal pronouns … He’d say, "… went to bank … had problem … sat down … couldn’t get out … killed a woman … very sad…". Brenda Blethyn, she’s absolutely superb in it. Brenda and I and the writers are desperately keen to do a series, 25 years later on … same couple … I think it would be wonderful."

Let’s see if that happens.