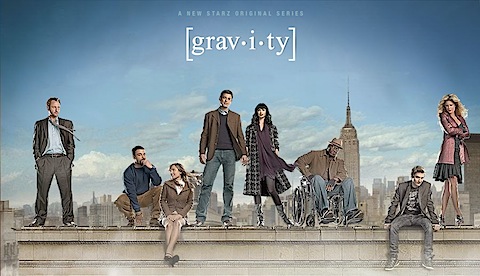 And so Starz’s relentless quest to become the new “edgy but low-budget” channel continues. In the wake of Party Down, Crash, Spartacus: Blood and Sand comes Gravity, featuring the likes of Ving Rhames and Rachel Hunter.

Now, I have to admit, I had no idea what this was about before I decided to watch it, so for a good five to ten minutes, I was sitting there puzzled. Was this a supernatural show, in which a bunch of people die and come back as ghosts? A comedy? Some kind of hate crime against gay men?

If only I’d known the working title for the show was Suicide for Dummies.

Plot
“Gravity” is an offbeat series about a support group for people who have attempted suicide. Unlikely relationships are forged when the colorful cast faces the challenges and opportunities that come along with a second shot at life. Robert and Lily, two star-crossed lovers from very different worlds, are particularly tested when the mysterious Detective Miller takes an unusual interest in them. The couple joins the likes of an aging supermodel, construction worker, hormonal teenager and picture-perfect housewife as the group learns to live and love again in New York City.

Is it any good?
It’s not bad, but it’s not as dark or as edgy as it would like to be – or would be if Starz had given it a budget. Our two main characters are Robert and Lily. Robert is rich but his wife has died so he tries to kill himself but driving his Mercedes off a cliff. He survives because he crashes into the swimming pool on a cruise liner for men so sterotypically gay, the whole show should be declared a hate crime merely for those few minutes.

The oddly named Lily Champagne works in a department store selling make-up. She realises she’s going to die a lonely old cat woman, so pops some pills – and wakes up in hospital after having made love to the man of her dreams in a near-death experience. The whole show should be declared a crime of excessive kookiness/poor green screen work purely for those few minutes.

They both get referred to a suicide-support group run by Ving Rhames, whose members include a former financier whose portfolio has tanked, a former supermodel who’s now hit the menopause (Rachel Hunter), a neglected teenager, a construction worker and an over-stretched housewife.

Episode one feels very oddly structured. We meet Robert and Lily. We go to the support group. Lily and Robert hit it off. Lily finds herself being followed by a police detective. He tells her the sketches she’s drawn of her dream afterlife man are of a con man who was in the hospital at the same time as her. She goes to find him and they have a date in a diner – which is watched by the police detective.

We then get about a minute at the homes of each of the other support group members, before everyone comes together at the end to look at a crime scene.

Supporting characters
So, with barely a minute apiece, at the moment, apart from Robert and Lily, everyone’s a little sketchy. Robert and Lily are less sketchy, but Lily feels more like an escapee from a Hal Hartley indie movie than a real person and Robert feels so ordinary, it’s hard to work out whether he has a character or not.

Nevertheless, there are some humorous moments, many of them involving Robert’s confessions to a Catholic Priest. It’s not especially deep, never dwelling long enough to explore an emotion, always relying on the instant recognition the audience should have of a character’s motivation for sadness (“This woman is lonely”, “This woman is scared of getting old”, “This man misses his wife”, etc) before moving on swiftly.

But it does have a rarely seen maudlin quality that gives the show more of a bite than similar shows – a US TV programme revelling in misery, sadness, suicide and death? Surely not – and I’m sure, given it’s only half an hour per episode, that later episodes will give the show a chance to look deeper. The acting, even Rachel Hunter’s, is reasonably good, and Krysten Ritter’s Lily is an appealing lead.

Starz really needed to give this more of a budget, because it looks like something that crept out of an 80s anthology show made in Canada at the moment, and the green screen work is really poor. But it’ll be interesting to see what direction they’re going to take with this one: comedy, drama or comedy-drama. It could go any direction at the moment and I enjoyed it enough to stick with it for now.

Here’s a trailer for episode two.

What have you been watching this week (w/e February 4)?

What I’ve been watching on TV this week