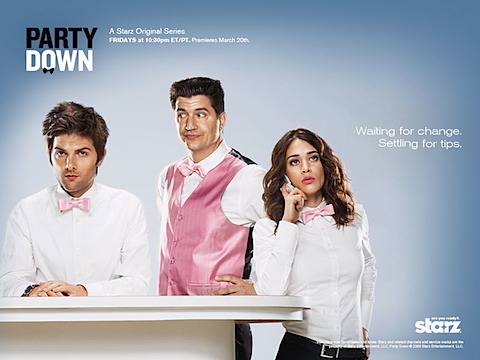 This ‘comedy’ has been sitting, waiting for ages to be made. So long has it been waiting to be made, that the original star Paul Rudd has become famous – too famous to appear in it any more – so now he’s exec producer.

Which is a shame, because at the moment, here’s the tally on the show:

They could have done with two good things.

Plot
“Party Down” follows a Los Angeles catering team – a sextet of Hollywood wannabes stuck working for tips while hoping for their “big break.” Each episode of this half-hour comedy finds the hapless catering team working a new event – – and inevitably getting tangled up with the colorful guests and their absurd lives.

Is it any good?
No. In fact, I could probably sue them for describing this as a comedy. It really is “one slight snort of laughter every half hour” comedy at its Starz finest.

The episode – which feels like improv but the kind of improv you leave on the cutting room floor from three hours’ of footage once you’ve found the good stuff that works – is yet another show that’s about losers losing for a reason: namely, they’re rubbish and they don’t realise it, yet we – because obviously we’re not losers, oh no – know they are and why they are and are supposed to laugh heartily at them as they put each other down for being losing losers.

But that’s only because I didn’t use them up during the show.

The characters aren’t enjoyable, the performances vary from the exceedingly obvious and poor to “wasted on this show”. The scripts are cringe comedy at its least funny. The only parts of the episode that are good are the bits with Lizzy Caplan in them, because she’s great, and the bits where they stop trying to be funny and just give you a slightly depressing look at some people who haven’t achieved their dreams and probably never will. Actually, if they’d described it as a tragedy with comedic moments, it might have been bearable.

So avoid it. Just do. Except if you’re a Kristen Bell fan because she’s popping up in an episode since Rob Thomas is one of the producers.

Here’s a trailer, the absolute best two clips from the show I could find, followed by the whole bastard episode. Yes, the whole thing.