Would that I had the time and resources (and money) to do this full-time and provide the very best service possible to all you lovely guys and gals. However, life is short, so I can’t. Ho hum.

The most notable and obvious gap in this ‘ere blog is that here I am, reviewing plenty of US TV for y’all in the UK so that you know what to keep your eyes peeled for, and then I leave you high and dry by not telling you when it’s going to air in the UK. Which is rubbish, I know, but c’est la vie.

So let me point you in the direction of some people who are far more helpful than me at pointing out what US (and UK) TV is worth watching each week:

Of the things to watch out for right now, I’d say keep your eyes peeled next Saturday, because the generally excellent spy show Burn Notice, which even gets its own tag here, starts at 9pm on FX (aka “The channel that shows all the really good US stuff, but no one can get, let along watch”). I found that out from Dan.

Fat Pig‘s cast is changing yet again, as regular readers will know. Joanna Page is heading off to film Gavin & Stacey‘s Christmas special so Kelly Brook’s taking over as Jeannie. I’ve reviewed the play twice already, and maybe (given the rate at which their digital PR person keeps emailing me) I might review it for a third time with the new cast and theatre.

But here’s the just released pics of the new cast including Kelly Brook. I can’t help but notice that despite the caption on the photo as provided, that’s not Ella Smith. Anyone know if the faux-Ella is her understudy or whether Ella’s heading off, too? Cos that’s news if it’s true.

If you’re on Facebook, you can see more pics at the Fat Pig group. Yes, that includes pictures of Kelly in a bikini.

Knight Rider was one of those shows, back in the early 80s, that everyone of a certain age watched. Only having four channels, no games consoles, DVDs, PCs worth mentioning, etc, might have had something to do with that. But watch it, we did.

The story of one man trying to make a difference, armed only with a leather jacket, some curly hair and an indestructible, super-intelligent, slightly camp, talking car, Knight Rider didn’t so much suck as live down to the expectations of primetime teenager-oriented television of the time.

I think it’s worth bearing that in mind, before anyone waxes too lyrical about the original, because although this new Knight Rider series has the IQ of Nuts magazine crossed with a bucket of KFC, it’s really just as good (or bad) as the original. Although it doesn’t have the Hoff in it yet.

END_OF_DOCUMENT_TOKEN_TO_BE_REPLACED 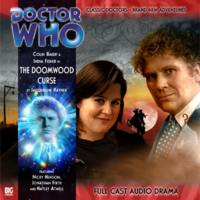 I imagine, if you’re a regular Big Finish actor, there is a range of reactions you experience when getting your latest script, depending on which of the various standard Big Finish categories it falls into. A lot of the time, you’re going to be wondering how you’re going to get all that jargon out. "Blimey, it’s a bit complicated. I don’t really understand a word of it. I must remember to be ever so serious."

Quite a lot of the time, you’re also going to be thinking, "Ooh, goody. This looks like fun. We’re going to have a laugh doing this, aren’t we?"

And then, just occasionally, you’ll get one through that not only makes you think, "Ooh goody, that’ll be fun," you’ll also be thinking. "Ah! I love the smell of ham in the morning."