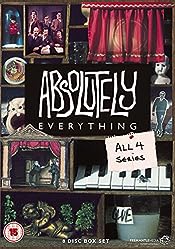 Absolutely is something of a lost gem (note to self: will it be obvious to readers that this is the start of the blog’s “Lost Gems” series? Must consider better way of introducing it). First broadcast on Channel 4 between 1989 and 1993, it was repeated approximately… never.

Yet it is fondly remembered by literally lots of people. Even me, who went to see one of the third series episodes being recorded, which was triffic.

Both absurd and dark, it wasn’t afraid to mock, gross out or write overly long musical sketches and remains an influence for comedians ranging from Paul Whitehouse to Hardeep Singh Kohli – as you’ll find out from this DVD box set that collects together every single episode as well as the cast.

Absolutely was a severely funny show best remembered for its characters, its love of language, and its celtic mix. I’m not going to say too much about it, since that would be setting a bad precedent and lining me up for heinous amounts of work later on down the “Lost Gems” line – plus there’s a documentary in the set that does it all for me.

But there was a strong Scottish feel to it, most obviously seen in the sketches about Scot zealot McGlashan and the absurdly small Scottish town with high ambitions, Stoneybridge (so called because of its stoney bridge). With Naked Video running on BBC2 at the time, you’d be forgiven for thinking that the only funny people in Britain in the late 80s and early 90s were Scottish. But there was also the occasional Welsh sketch penned by John Sparkes (who had defected from Naked Video. Featuring Denzil the disgusting DIY failure and his wife Gwynnedd, it even had Welsh subtitles, which you don’t get a lot of these days.

The show poked fun at the middle classes, mainly through the Nice Family, songs such as “Bank Holiday” and the ever-so politically correct yet not Wells couple (“Our Kenyan baby’s arrived!… Oh my God, it’s not black! They’ve sent us a Brazilian!”). It messed around with words (“I don’t need glasses then?” “You don’t need glasses now”). It did parodies. It had the little girl who explained as only a little girl can how the world works. It had gross lavatory human, personified in the form of Frank Bovis, host of “On the lavatory with Frank Bovis”.

I’ve now run out of ways to praise it. Just buy it and laugh your arse off.

Not the best quality you’ll have ever seen. In fact, it feels a bit like they’ve taken their old home copies and then stuck them on DVD. All the same, it’s not so bad that you can’t actually watch it.

Quite a lot of extras here. There’s a dodgy transfer from VHS of the pilot episode, complete with roll bars, which is about 50% the same as the first episode but with some of the less well advised stuff still in it.

There’s a short documentary explaining how the show came about, which proves the cast are still as funny as they were in the good old days.

There’s another documentary in which people who are both famous and yet famous explain Absolutely‘s significance in history and to themselves.

There’s a gallery of video clips in which the cast explain how individual characters came about. And finally there’s a photo gallery and another documentary that talks about the famous Absolutely music and animations.

I say finally, but that’s all that’s on the extra eighth disc – there are also cast commentaries on two or so episodes of each disk. You can either just listen to the commentaries or have the cast appear in the bottom corner of the screen for a video commentary, which is a novel thing I haven’t seen before. They’re not the most informative of commentaries (although I haven’t yet made my way through all of them), but they’re fun.

Here’s a trailer for the DVD boxset itself, followed by a few sketches from the series.

McGlashan on the English

The job interview from Hell