On offer this time is Nicholas Knight’s Supernatural – The Official Companion Season 2, which as you might suspect, is a "companion" guide to the second season of Supernatural. Here’s the promo blurb: 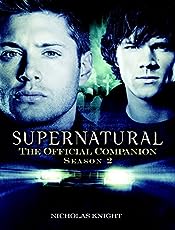 This official companion is packed with exclusive interviews, photos, behind the scenes secrets, a complete episode guide, plus a color portrait gallery of the stars.

This season 2 official companion features a foreword from producer/director Robert Singer, plus an abundance of exclusive comments and content from series creator and executive producer Eric Kripke. There’s a complete season two episode guide, packed in with exclusive interviews, and dozens of photos, including a 16-page color portrait gallery, and behind-the-scenes secrets, including a Meet the Crew section on the writers, editors and make-up designers.

Fans will also find detailed features on the characters and creatures from the show, including a closer look at Creepy Clowns, and you won’t want to miss our 22 useful hints for aspiring monster hunters!

It’s pretty much what it says on the tin, here. As with any licensed book or magazine (not just Titan’s), you’ll find nary a word of dissent or suggestion that any episode was not in fact the best thing to happen to the human race since Adam and Eve left the Garden of Eden – each building on the previous glorious episode until the Rapture of the finale.

All the same, it’s not half bad for what it is. One page bios on supporting actors aren’t going to tell you very much at all, and the useful facts about monsters are one of those filler concepts that have been crammed into genre books since practically the dawn of television. But you get some behind-the-scenes facts that are quite interesting, as behind-the-scenes facts go, and you learn about how the story arcing was done, how it progressed, how budget limitations changed it and so on.

At £9.99, it’s possibly a bit pricey for a softback book that’s predominantly black and white with a few colour photograph pages. And the writing style is possibly a bit young for a show that’s aimed at slightly older teenagers and young adults. But if you’re a big lover of Supernatural and want every possible nugget of info possible about the show, it’ll do what you want.

To win a copy of the book, all you have to do is leave a comment below before the 31st May (that’s two weeks away), explaining why you deserve it more than anyone else – the most deserving plea will get their pristine copy posted to them ASAP. Or you can just try to amuse me: that’ll work, too.

Apologies to overseas readers, but again, the competition’s open only to UK residents, since I can’t be airmailing these things on my budget. I’m not made of money.

You can find out more about the book or buy it from Amazon.co.uk.

The CW’s upfronts 2016-7 – a rundown and clips from the new shows, including Frequency and No Tomorrow

What have you been watching this week (w/e October 1)