From the 17th March, Film4 are going to have a new range of budget DVD titles. The RRP is £6.99 and the films being released are:

I’ve just checked Amazon and they’re listing them at £15.99 discounted to £11.99, so I’d advise buying them in shops while the initial discount campaign is running at least.

Anyway, since I’m very partial to Monica Potter, Rufus Sewell and Ray Winstone, and don’t mind Tom Hollander (shame about Joseph Fiennes though), I ordered up a nice review copy of Martha, Meet Frank, Daniel & Laurence as a sample of the range. 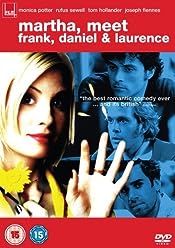 Okay, they were 10 different DVDs, two of which were Martha, Meet Frank, Daniel and Laurence. Which was nice, since it’s going to be the second entry in the “Movies you should own” section of this blog.

Martha, Meet Frank, Daniel & Laurence, also known as The Very Thought of You in the US and MMFDL here because I’m tired of re-typing it, is quite a nice little rom-com with ambitions. It’s a bit like Pulp Fiction or Rashomon in structure, but without the murders, etc, obviously.

Laurence (Joseph Fiennes) has a problem, something he decides to share with his next door neighbour (Ray Winstone) at 5am, because he thinks he needs a psychiatrist. The trouble is his two childhood friends: jet-set lawyer Daniel (Tom Hollander) and failed actor Frank (Rufus Sewell). They – and he – have met this American woman, Martha (Monica Potter), who’s taken the first flight to anywhere that she could afford and has randomly come to London to escape from her terrible life in the US.

Except they’ve all met her separately and they’ve all fallen in love with her. So Laurence relates each of their encounters with Martha, which turn out to have overlapped in odd ways. What seems an odd coincidence, decision or event in one story turns out to have an explanation in another.

MMFDL is a 1998 film (oh Sweet Jesus how time passes. It’s a whole decade ago!) and lies somewhere between the “eccentric Brits” rom coms of the early 90s (cf Four Weddings) and later “Cool Britannia” films that have a slightly less antediluvian view of England. The South Bank’s just starting to look cool, it’s glorious sunshine most of the time with minimal use of rain, and no one owns a castle or mansion. We even have Martha and Frank competing over who has the worst life, with Frank citing his horrible bedsit in his defence. He eventually trumps her “goes to sleep to the sound of police helicopters and gunfire” with “arrested three times for falling asleep in the street, drunk.”

It’s all a rather sweet take on love at first sight, friendship and “finding yourself”. The dialogue’s sparky and occasionally laugh out loud funny and the twists and turns, while leading to a near inevitable and predictable outcome, still manage to surprise: you expect certain clichés and quite often they appear but are then inverted. Potter’s kookily mesmerising, if a little wooden – sort of the previous romcom generation’s Zooey Deschanel – and Fiennes is a bit wet. But Sewell is as charismatic as always, without managing to steal the movie, something Ray Winstone almost manages to do with probably his most understated performance ever.

As for the DVD itself, there’s a new set of titles compared with the previous release, designed to bring it in line with the new Film4 branding. The extra features are pretty minimal, since the content hasn’t been updated since the 1999 issue, so there’s a trailer and a behind the scenes documentary that puts the “ette” in “featurette”, but that’s about it. Picture quality is very good and while the sound quality is good, it’s all very low, so you’ll be cranking the volume up on your tele quite high if you ever buy it.

At £6.99, it’s quite a bargain, so if you’re going to buy it, buy it now rather than wait until the price goes up – or wait a very long time for it to start winding up in the bargain bins of pound shops again. It’s a shame that this is really just a rebranding exercise – Film4 could be a name associated with quality in the world of DVDs, just as it is in the broadcast sphere. Instead, they’ve gone for minimalist reissuing of existing titles. Maybe we’ll get something better for the Blu-Ray releases. However, the three high def titles being released on the 31st of this month (Touching the Voice, Motorcycle Diaries, East Is East) are all coming out on HD-DVD. I asked whether there’s a Blu-Ray strategy yet and they told me to “keep watching this space”. That would be a no for now, then.

Now for some YouTube content for MMFDL. First is the trailer, then an interview with the ever so gentle Joseph Fiennes. I’ve also included a clip of Monica Potter on the alleged comedy Head Case, which started on Starz in the US this month. She should be more famous.