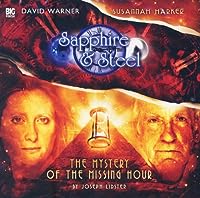 There’s something about the Big Finish Sapphire and Steel plays. They make you acutely aware of time.

Tick tock. Tick tock. Your life is ebbing away. Tick tock. That’s two hours you could have been using for something else. Instead, you’re now two hours closer to being dead.

Certainly, for the first half of The Mystery of the Missing Hour, that’s how I was feeling (hence the somewhat tardy nature of this review – I wasn’t exactly desperate to get through this one). I even reached the point where I was considering pretending to have listened to the whole thing and reviewing it all the same.

It really was that bad. I’d even consider using a word beginning with s.

But I’m glad I’m conscientious enough to have stuck through it. Because disk two is a cracker.

Big Finish (and the writer Joseph Lidster) have essentially taken a huge gamble: that because you’ve ponied up the cash for the play, you’re going to listen to something that is deliberately complete crap and stick through to the end.

Plot (stolen from the Fig Binish web site – it looks a bit like the Big Finish one, but isn’t)

An archaeological expedition arrives from England, ready to uncover the secrets of a long-lost Pharaoh’s tomb.

But someone on the expedition isn’t what they appear to be.

It’s therefore lucky that when the first impossible murder takes place, two of the other hotel residents turn out to be quite the detectives…

Without giving too much of the game away, I can tell you the first half is deliberately awful. You sit there wondering how human beings can write such bad dialogue, act so badly, do such bad accents, etc. You’ll also wonder where the hell Sapphire and Steel have got to and why the Big Finish crew have to be such arses – oh well done, you’re playing with form and convention. Gosh, aren’t you clever? You’ve even done a new version of the theme tune. Is that a sound effect or can I actually hear you slapping yourselves on your own backs in self-congratulation? And why the hell, given all the marvellous TV Sapphire and Steel stories that aired, do you always do a version of the most rubbish one – Adventure Five (the Agatha Christie-esque one)?

Unlike the universally bad first season, there have been some genuinely good, albeit patchy stories in the second season

Fortunately, there’s a twist. You may or may not see it coming. Given this is a murder-mystery of sorts, you can spot certain clues if you pay careful attention, although there’s so little time to consider what you’ve heard and the first half is just so bad, you might not be so inclined.

Disk two, however, is a different creature. We get more playing with form and medium, but this time, it’s all for the good. There’s a little too much Big Finish continuity in it – you’ll actually have to have listened to some of the other plays and cared enough to remember them to get some of the references – the cast are still way too hammy, and Sapphire and Steel are still learning some very special lessons about the nature of humanity.

But it’s creepy and clever, there’s some good use of sound, and the final twist is worthy of the TV show itself. In fact, it’s one of those endings that will stay with you, for a few days at least and potentially for the rest of time.

In a situation that mirrors the TV series, this could have been the final Big Finish Sapphire and Steel play and it’s written as such. However, unlike the TV series, the audio plays have had a reprieve and there’s another season on the way.

I’m not sure whether to say hurrah or not. Unlike the universally bad first season, there have been some genuinely good, albeit patchy stories in the second season, so things are definitely improving. I’m not sure if I’d like to have to go through Big Finish’s new “bad first half/great second half” Sapphire and Steel formula every time (cf Cruel Immortality), since it was almost more than I could bear this time. Nevertheless, there is some promise and Big Finish might finally be finding its feet with the series. Which can only be good.

Actual worth: £12.99 or you could barter a portable ghost detector

Available from the Big Finish web site and from Amazon

A preview of the special edition release of the two-part Space: 1999 story Bringers of Wonder

A look back at Lost Gem The Aphrodite Inheritance

What’s your favourite TV decade? And how did you get to see it?

How is the youth of today expected to catch up with its TV heritage? Or even become interested in it?
[…]