When Battlestar Galactica first arrived on our TV screens, it was a surprise. It took a really bad old show that for some reason we all fondly remembered from our childhoods and turned it into a really good show that took military authenticity and married it with misery, dystopia and authentic human relationships.

But as time went on, the clean, uncluttered hardness of BSG got a little dulled both by the weight of its own mythology and the occasional lapse into dramatic cliché. That’s not to say it was bad – it was still one of the best shows on TV. It was just up its own arse a little bit.

Razor, an almost direct-to-DVD movie that aired on the SciFi channel over the weekend, is a distillation of the good and the bad of BSG. On the one hand, it’s tense, well acted, gritty and has fantastic effects. On the other, it’s more than a little bit pretentious, suffers from a few hackneyed plot strands and has yet more heavyweight mythology bundled on top.

END_OF_DOCUMENT_TOKEN_TO_BE_REPLACED 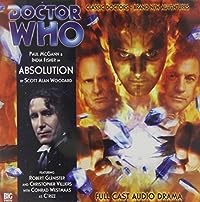 And so the chopping begins. C’rizz, all round irritant and obstacle to proper character development, is no more. He is an ex-companion. Woo hoo!

A holdover from the weirdy “Divergent Universe” era of eighth Doctor stories, it’s slightly fitting that his final story should be another weirdy alternate universe piece that explains at last the slightly uninteresting secret he’s been carrying with him ever since his exodus.

Trouble is it’s also a fittingly uninvolving story, full of interesting ideas that somehow fail to lift off thanks to the usual infusion of gobbledygook, poorly explained concepts and a resolution that’s somewhat incomprehensible.

END_OF_DOCUMENT_TOKEN_TO_BE_REPLACED

I haven’t watched it yet (shame on me), but did you spot any references to Doctor Who in yesterday’s episode of The Sarah Jane Adventures?

And since it was the last episode of the series, what did you think of it overall, those brave few of you who made it through to the end. Dare I suggest it was more consistent and in some ways better than Doctor Who itself (DT lovers can pretend it’s a solar eclipse or something and stick their thumb over his head on the TV screen to be able to judge it fairly)?