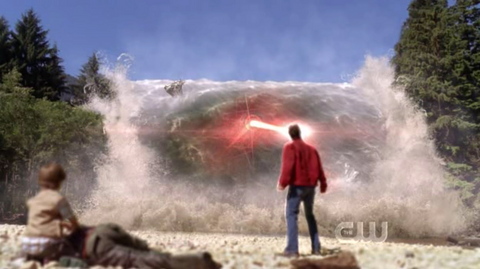 In the UK: On E4 and ITV2 at undertermined points in the future

Major characters gotten rid of: Ooh, that would be telling

What do you mean there isn’t one? That’s not right. This is Smallville. Every season ends with a massive cliffhanger, in which all the major characters are enperiled, Clark’s secret is revealed to everyone, etc. Then by the end of the first episode of the next season, everything’s back to normal again.

Actually, there is a mini reset button. After all, at least two characters died at the end of last season, so we couldn’t just leave them like that. You know: dead n’all. But apart from the necessary resurrections, not everything went back to the exact same place it was at the end of season six. Now that’s amazing.

When we last left Clark and co, Clark was busy fighting Bizarro Clark – or at least a bizarre version of the Bizarro Clark of the comic strips. Chloe had keeled over after revealing her special power was crying on people to bring them back from the dead. Lana had exploded. Lex, Lionel and Lois were in various states of moistness or threatened moistness. How was it all going to end?

Not telling. You’ll have to watch it.

Actually, I’ll tell you how it ends: it ends with Supergirl. Clark’s cousin, another strange visitor from another planet, has been handily lurking underwater all these years, ready to be confused with an angel at a moment’s notice – and to slip into a midriff-revealing cosi, given half a chance. Already promoted to the main titles without yet having had a line (this is The CW, the network that cares more how you look when you say a line than how you say it), it’s clear that the phrases “franchise extension” and “everyone’s contracts run out at the end of this season” are weighing heavily on the minds of the producers and they’re looking to launch a new series, using Smallville as an extended pilot.

Their previous attempts (cf Aquaman and the heavy Green Arrow piloting in the last season) didn’t work out too well so they’ve decided to go with a lady this time. It’s a little too soon to judge if they’ll succeed, but if the booty shaking in the title sequence is going to be a guide, I’m going to put money on it all going badly wrong.

New arrival to one side, the producers are also thinking that this could well be the final season – and that Tom Welling doesn’t really look 16-18 any more, not totally surprising now he’s 30 – and are trying to push Clark into accepting his future status as Superman. The arrival of Supergirl to guide him on his path and to fill him in on his back story is an interesting way of doing it, it has to be acknowledged, but I’m sure they’ll tread water a little, hoping to get an eighth season. If not, we’ll finally get something approaching ‘developments’ in the plot.

Aside from Clark and his battle with his alternative self, we also see Lex having a road to Damascus – that will no doubt turn e-vill within a few episodes, Lois soften up a little (thankfully) and possibly the most stupid disguise you’ll ever see (you’ll wonder for a moment if disguise has been redefined when you weren’t looking to mean ‘stand out as much as possible from the crowd, short of firing off a klaxon every three seconds’). Chloe fans will feel a little short-changed, there’s no sign of Jimmy (who’s now been promoted to the titles as well), Lionel’s being dried out and Mrs Kent has disappeared completely.

It’s not the best Smallville season-opener so far, but it’s probably one of the least stupid. There are also signs that the show could finally be leaving its holding pattern and heading off in an interesting direction. Existing viewers will know the score by now, new viewers: what’s the matter with you? This is season seven and you’re only just tuning in? You’ll probably still enjoy it though.

WHYBW? Including What We Do In the Shadows