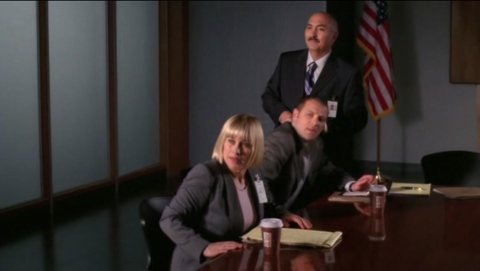 In the UK: Probably SciFi and maybe BBC1, since they’ve shown earlier seasons. No definite confirmation yet, though.

So Medium‘s back. I was looking forward to this, since when it’s good, it can be fun and well written. With the opening episode scripted by series creator Glen Gordon and Javier Grillo-Marxuach (ex-writer for both Lost and The Pretender), it should have been good. But I think they got carried away with the two minutes of animation…

Medium concerns reluctant psychic Allison Dubois, who can talk to dead people and receive coded messages from beyond in her dreams. With reluctant support from her mathematician husband (Jake Weber), she works for the district attorney (Miguel Sandoval), helping to solve crimes with the aid of the recently departed.

All that seems a bit heavy, but it doesn’t take itself too seriously, and looks more at the human and the psychic dimensions of the situations Allison finds herself in.

Season three continues much as in previous two seasons. Allison has dreams about a crime; she’s haunted by a dead person; her husband is a bit grumpy. There are some nice moments, including animated scenes that feature in her psychic younger daughter’s dreams. But there was nothing really new, this time round, and the sparkly dialogue wasn’t quite as sparkly as I’d have liked. We do have a few changes in terms of getting to see more of the supporting characters’ personal lives. But I’d like to see things shaken up a bit more.

If you’ve never seen it before, tune it and enjoy everything as though it were new. If you have and love the formula, you can tune in and see it again. But fingers crossed, things will develop in new ways during the rest of the season.