It’s the last of the finale guides for this year (unless I missed a show) and so it’s time to deal with everything that didn’t fit into any neat categories.

After a pretty insipid season that lost most of the things that made the first season so good, we have… a pretty insipid finale that veers into even worse territory. Don’t fret since there’s no real cliffhanger, other than the possibility that we won’t bother tuning in next year. 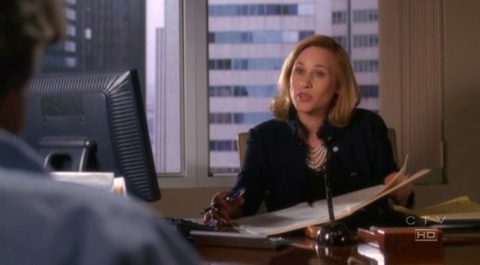 Medium‘s had a pretty dull season, too, this year, lacking the sparky dialogue and situations that gave it such a good start. The finale does at least give us a good ending to the season, thanks to an alternative universe episode in which Allison burns her arm on an oven grate and winds up married to David James Elliott from JAG. It has some nice moments and is more of a paean to married life than a finale, but it was still nicely heart-warming. No tension whatsoever to affect the nerves once we get into alternative universe territory, although the opening suggests that something more drastic is going to happen. The episode, however, is more the visual equivalent of a mug of Ovaltine than a thrill ride at Thorpe Park. On the other hand, it did feature Peter Wingfield as a baddie with no dialogue. Since you just don’t get Peter Wingfield in to sit there and say nothing, this suggests he might be back in a recurring role next year, which is probably enough to make most people tense.