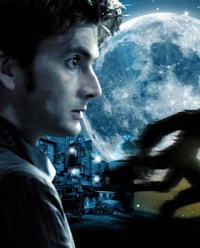 Ah, that’s a bit more like it. Only a couple of slack moments and a not totally convincing bit of CGI but otherwise, ‘Tooth and Claw’ was classic Who:

And they had some wu shu-ing monks and a reference to Jamie McCrimmon. Cracking. What more could you ask for from Doctor Who?

Couple of extra things. Number one, I’ve turfed up an interview in my MP3 collection of David Tennant explaining his love of Who and his Big Finish work. It was actually done while the Christopher Eccleston series was airing, amazingly enough. Email me if you’d like to hear it (note: it wasn’t me who did the interview, so you won’t get to hear my dulcet tones).

Number two: I’m in Wales at the moment. My lovely wife wanted the house to herself because she had three of her friends coming down for the weekend. So I’ve upped sticks to the mother-in-law’s and have spent the day cutting hedges, creosoting fences, mowing lawns, uncovering hedgehogs (Ahhhh!), climbing into lofts, moving heavy things and a whole lot more. So now I’m a funny pink colour from over-exposure to sunshine. Curses. Outside bad. Inside good.

But if you’ve never watched Who in Wales, it’s very entertaining. Short of having a man in a red rugby shirt signing at the bottom, there’s almost nothing more they could have done to make it clearer that this was “Made in Wales. God man! That’s cowing lush!”. They even have a little placard with an announcer at the beginning saying “Made in Wales by BBC Wales”. In Wales. That was Wales. Sorry, did I mention that it was shot in Wales?

Incidentally, I have no idea if that headline is accurate Welsh. Despite my best intentions to learn Welsh, I’ve been unable to find an Instant Welsh book, those Instant books being about the only language-learning books I get along with. So my Welsh stops somewhere south of the numbers one to six. Don’t, therefore, quote me on the headline, but I think it means “Welcome to Doctor Who”. Which is pretty meaningless of course. Oh well.

UPDATE: Further thoughts – Another ‘classic’ point was the TARDIS didn’t turn up at the right place or the right time, which is always refreshing. But all that Torchwood stuff is starting to hack me off and doesn’t make a lot of sense at the moment. Yes, we get it, there’s a spin-off called Torchwood coming.

My review of Horror of Glam Rock