I made it. Remarkable efficiency plus the help of my lovely wife on Monday meant I was able to buy The Sun for six days in a row. So that’s £2.10 + £2.99 postage and package for six episodes of Doctor Who, due to arrive some time in the next six weeks. I can’t believe I managed it, or that the slow, creeping hand of fanboy obsession has gripped me again, 15 years after I first shed it, but there you go. I will fight it. I will.

Curious that you only get one episode from each story, making Rose the only complete adventure; curiouser still that they thought two episodes from incomplete stories (The Dalek Masterplan and The Faceless Ones) were a good idea, since no one can actually go out and buy the DVDs for the complete stories. But they’re all good episodes; I don’t think I’ll be rushing out to buy full-on BBC Doctor Who DVDs, lest my wife leave me, but it’ll be nice to watch those early stories in DVD quality, rather than 17th generation VHS.

The Sun, though. Odd, isn’t it? It’s not my normal paper of choice. Thought I’d give reading it a try, because occasionally the tabloids can be surprising: The Star was actually pretty good until Richard Desmond got his hands on it. Plus there’s something odd about only buying a paper that supports your own particular beliefs – challenges are good.

However, The Sun wasn’t particularly offensive, unlike the Daily Mail, which leaves any right-thinking sentient human being spluttering with indignation and disbelief that such flagrant evil is published every day. The Sun was just dull; I couldn’t even be bothered to read it after Tuesday: I just snipped my vouchers and recycled it. Shows you how far it’s fallen since Kelvin MacKenzie’s day. It wasn’t dull then. Offensive, yes. Dull, no. 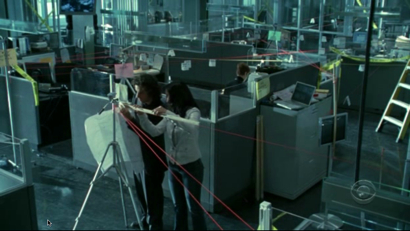 Heard of “The CSI effect”? It’s this new phenomenon in the US that’s spreading over here. The basic upshot of it is that because so many jurors have been watching CSI and think they know all about forensics as a result, loads of suspected criminals are being acquitted. This is happening even when the suspects are quite obviously guilty, because the jurors don’t think enough has been done to analysis evidence, even when it’s not actually possible.

We can all laugh at the rubbishness of CSI Miami, but there are people who have been convinced by it into thinking it’s possible to computer enhance surveillance video footage to extract licence plate details from the reflection in a bystander’s cornea.

But despite the fact the CSIs are some of the highest rating shows in the US and the UK – in fact, CSI Miami is apparently the most watched show in the whole wide world – there appear to be a group of people who don’t watch them at all. These people are the producers of other crime shows.

Take CSI. Name me one other crime show in which CSIs/SOCOs (aka ‘forensics people’) interview suspects or are even seen to talk with anyone at a crime scene. It just doesn’t happen, because in real-life, the police ask the questions. Yet as the ‘Buckley Crime Show Hypothesis’ demonstrates, producers assume we don’t watch other shows, so they can get away with convincing us that this is how it’s done.

But it also works in other shows. This Friday’s episode of Numb3rs, the show in which mathematicians solve crimes, seemed to be under the impression that none of us had ever watched CSI – despite the CSIs’ ratings and the fact Numb3rs is a CBS show, too.

Now Numb3rs hasn’t been remotely realistic since the middle of the first season. But Friday’s episode kind of took the biscuit. Charlie’s bright idea was to use lasers and bits of string to work out where the shooter had been and where he had been shooting. The FBI seemed astonished by such a suggestion. Unheard of, I tell you!

Except if you’d seen almost any episode of any one of the CSIs.They do that all the time. Is there anyone here who’s never seen them do that?

PS Most of the mathematics in Numb3rs, while usually applicable in the way the show depicts, seems to have been distorted via some series of Chinese whispers. Typical example of distorted dialogue from Friday’s episode: “I’ve been trying to analyse this as an example of Brownian motion, but I’ve been neglecting the fourth dimension: time”. Really, mathematician Charlie? You were analysing motion without considering time? Wouldn’t everything be static in your calculations then? Dear oh dear.

I’m not making this up. There really is a William Shatner DVD club. Every month you’ll get a DVD selected by William Shatner himself (maybe) as well as a newsletter with Shatner’s reviews of movies. There’s even a chance to vote in weekly polls on Shatner’s best Star Trek performances.

“But what kind of movies will I get if I join Billy’s DVD club?” I hear you ask.

Why, ‘Underground hits no one else has’, of course!

By which, of course, they mean absolute bollocks B-movies that no one with any sense will watch and which probably cost $0.99 in the bargain bin – but to you, discerning sci-fi fan, only $4 by post. Films like Immortel: ‘New York 2095. In a strange pyramid floating in the sky, gods of ancient Egypt are judging Horus…’

The sad thing is, I’m absolutely convinced dozens of sci-fans will join. Twats. At least Shatner can laugh all the way to the bank. Did you know that during the dot.com bubble, he was the highest paid actor in the world? Now he’s doing this and All Bran ads. Weird, huh?

Well, there are a few differences, but the big one is the US SciFi channel actually makes new shows. Admittedly, the UK channel does, too, but they’re either video review shows or they’re “Tales from the Conventions”. Plus there’s that new one with Michael Ironside that they’re co-producing with Canadian TV. But other than that, they don’t make shows.

In the US, they make lots of shows. They make really god-awful B-movie sci-fi films, usually starring the likes of Joe Lando (remember him from Dr Quinn, Medicine Woman?) and Bruce Campbell. They make silly shows about alien abductions and psychic powers. But they also make shows like Battlestar Galactica, Stargate SG-1 and Stargate: Atlantis.

Just to ram their American superiority in our faces just a little bit more, they’ve unveiled a new slate of programming. To really start kicking sand in our eight-stone faces, they’re launching a prequel to BSG called Caprica that focuses on the times leading up to the creation of the cylons. While the phrase “television’s first science fiction family saga” sends chills down my spine, so did “remake of Battlestar Galactica” until I actually watched the new show. So I’ll flag Caprica as ‘sounds bad, will probably be very good indeed’ for you to note in your calendars.

Then there’s Snap about ‘a Federal agent who uncovers a deep-seated and seemingly unstoppable conspiracy’. Now that does sound pants and probably will be, too. Persons Unknown (‘a surreal mind-game of a series centering on a group of strangers who awaken in a deserted town with no memory of how they arrived, only to realize that there is no escape’) could be good, although I suspect I’ll spend most of the time looking for bits they may have half-inched off The Prisoner.

The Bishop just sounds inherently amusing: ‘from executive producers and writers Freddie Prinze, Jr. and Conrad Jackson, this one-hour drama revolves around a young slacker whose charmed life is disrupted when he discovers that he has a supernatural gift’. The power to carry a crook. In fact, I could swear Monty Python did a sketch about a fake crime show called ‘The Bishop’ – so best to steer clear of that one I think unless you fancy a laugh.

Blink again sounds like a rip-off, this time of Canadian show The Collector: ‘A group of Afterlife investigators try to help those about to make the wrong choice, in the blink of an eye before destiny is sealed forever.’ Could be good, could be bad, but as if having a show exec produced by Freddie Prinze Jr weren’t enough, this one’s exec-produced by Will from Will and Grace. What next? Shows produced by the Crazy Frog?

Last show of interest is a mini-series based on classic piece of 70s cobblers, Chariots of the Gods. Since that was in some way the inspiration for the worst movie ever made, Hangar 18, I’m dead set against it from the outset.

Nevertheless, compare that with the UK’s SciFi channel and you’ll have to admit, it’s a damn sight more impressive. Curse those Americans, their advanced economy and their high production values.

It was rubbish, so no surprises here (other than its initial commissioning), but Hex has been cancelled. No third season then for the uneasy combo of teenagers talking about sex ridiculous amounts while being plagued by poorly CGI-ed ghosts and demons.

This, incidentally, was one of the first moves by Sky One’s new director of programmes, Richard Woolfe. A man with taste. Promising.