Cabin Pressure is one of the finest sitcoms ever to grace the radio airwaves. It ended a few years ago now (gah, 2014!), mainly due to Benedict Cumberbatch’s sudden fame thanks to Sherlock but also because each episode started with a different letter of the alphabet and they ran out of letters.

It is much missed.

But there seems to be a lot of Cabin Pressure about, all of a sudden. Inept air steward Arthur Shappey’s grandson is currently piloting spaceships on Avenue 5 (US: ABC; UK: Sky1).

And Arthur himself is currently trying to help us all survive quarantine with Cabin Fever, the first episode of which is naturally set in Fitton.

To be fair, it is probably the most interesting unboxing of some records you’ll ever see.

As if I wasn’t getting pangs of 80s nostalgia bad enough already thanks to Stranger Things, I’ve just watched the latest episode of Kermode Uncut with Alex Cox and I’ve got them even stronger.

Cox is the director of Repo Man, among other things…

…but is probably best known in the UK from his time presenting BBC Two’s Moviedrome in the late 80s and early 90s. That was a time when the BBC took film reasonably seriously on its main channels. Barry Norman was the ever knowledgeable host of BBC One’s Film 8x/9x, reviewing films each week with the seriousness each deserved (or maybe didn’t).

Meanwhile, Howard Schuman’s Moving Pictures on BBC Two was discussing movies and interviewing directors with a competency that means it was subsequently used to teach film studies and even managed to save Mike Figgis’ career following Mr Jones.

But slightly more accessible was Moviedrome, hosted by Cox between 1988 and 1994. Each curated season consisted of a number of movies picked by Cox, some good, some bad, all interesting, which he would discuss before their showing, highlighting both their positives and negatives. There are numerous movies I would never have seen without him, including my beloved Manhunter and The Andromeda Strain, which are the ones I usually cite. But simply looking through the list of movies he introduced, I can see that I’d forgotten he also gave me my first tastes of The Wicker Man, The Parallax View, Invasion of the Body Snatchers, The Fly, The Thing From Another World, THX 1138, Sunset Boulevard, Get Carter and Solaris, to name just a few.

For sure, Film 8x‘s roving reporter Tom Brook is still doing marvellous work on BBC World News’ Talking Movies, but that’s about it and the idea of curation seems to be something that only Film4 and a few more obscure channels do and then occasionally. Which is shame. If only there were a modern-day Moviedrome, maybe even hosted by Cox.

Well, Cox has just made his second appearance on Kermode Uncut, this time to discuss Moviedrome, and Mark Kermode asks him what movie he’d like to feature in a new Moviedrome. As you might expect, the answer is superb and will just make you wish Cox was back on our screens again. 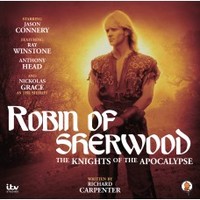 So it’s here at last. It may have taken decades, switched medium, needed a Kickstarter campaign to get it going and then switched production company, but Robin of Sherwood – The Knights of the Apocalypse is finally here.

For those who don’t know what Robin of Sherwood is/was, hien? Quoi? C’est incroyable! But here’s my nostalgia-filled remembrance of it to fill you in. In essence, though, it was one of the best UK TV shows of the 1980s giving us the perhaps definitive TV Robin Hood. However, it was cancelled following its third series when the funding ran out.

The feature-length Knights of the Apocalypse was written by the show’s creator, Richard Carpenter, as a continuation of the show, but despite his best efforts, it never got made for TV or a movie. But to raise a bit of cash for charity, Spiteful Puppet Productions (who produce a surprising number of other Robin Hood audio dramas) has managed to get just about all the actors and actresses from the original series to recreate their roles and finally bring Knights of the Apocalypse to life as an audio play.

Does it capture the original’s strengths and stand as a worthwhile addition to the canon? I’ll let you know after the jump, but here’s a trailer and – ooh! – a news clip.