TV doesn’t have many auteurs – that is, people whose work you can recognise pretty instantly simply from their ‘look and feel’. Largely, that’s because TV seasons are so long and production so collaborative that one individual, even a showrunner, is unlikely to have enough control over every episode that their ‘fingerprints’ can be spotted.

Sam Esmail seems to be one of the few who can claim to be a TV auteur. The creator and frequent director of Mr Robot, he has a distinct, innovative, experimental directorial style, as well as equally distinct thematic concerns about the nature of the reality.

Or so I’ve gleaned from Homecoming, Amazon’s new original series starring Julia Roberts as psychiatrist at a medical facility helping veterans recover from PTSD, all 10 episodes of which are directed Sam Esmail. From the opening titles of the first episode to the final post-credits scene of the tenth episode, if you’ve seen Mr Robot, you’ll never be in any doubt whatsoever that you’re watching a Sam Esmail drama. And that’s a double-edged thing.

Back when I was reviewing Alex Inc, I pointed out that US firm Gimlet Media has discovered the only way to make real money from podcasts: get someone to adapt them as TV series. Gimlet seems to be getting quite good at this, since Homecoming is another adaptation of a Gimlet podcast, albeit a relatively loose one. Ironically, it’s also vastly more interesting for its visual style than for its actual storyline.

The show runs in two parallel timelines, each of which has its own aspect ratio. The first is set in a blurry, 1970s-style 1:1 aspect ratio 2022, when Roberts is working in a seaside diner as a waitress. Into her life comes DoD complaints investigator Shea Whigham (Waco, Vice Principals, Boardwalk Empire) who wants to know about an incident at a facility at which Roberts used to work involving Stephan James (Shots Fired), one of the ‘Homeland’ veterans in the facility’s care. Roberts denies everything and pleads ignorance.

Meanwhile, back in crisp, HD 16:9 2018, we get to see Roberts’ evolving relationship with James as she provides therapy to him in an effort to help him deal with what he’s seen while fighting overseas. We also get to see the increasingly angry phone relationship she has with boss Bobby Cannavale (Mr Robot, Antman, Jumanji), as it becomes clear that maybe Homecoming has a slightly different agenda to the one its participants have been told.

What isn’t Roberts telling Whigham and why is she now working as a waitress when she’s a trained social worker? More importantly, over the course of the season, what Roberts isn’t telling Whigham increasingly becomes less important than why… Spoilers after the jump.

Homecoming is a triumph of production values and acting over story content. It’s amazing to watch and listen to; it’s also not that exciting.

It’s certainly a zeitgeisty affair in that it both taps into similar themes to Netflix’s Maniac and has the same modish 30-minute runtime as the likes of Mr InBetween. There’s also a great supporting cast: we have Dermot Mulroney (Roberts’ co-star from My Best Friend’s Wedding) as her 2018 partner, Sissy Spacek as Roberts’ mum, Marianne Jean-Baptiste as James’ mum, Jeremy Allen White (Shameless) as James’ suspicious co-inmate, Frankie Shaw (SMILF) and Sydney Tamiia Poitier.

But it’s the look and feel of the show that will stick with you far more than any plot details or the cast. The show is very much Esmail’s homage to 70s conspiracy thrillers. Even beyond the different aspect ratios and filmic stock-tinting, it’s a whirling dervish of continuous takes, split screen, dizzying Hitchcockian shots down spiral staircases, and Citizen Kane flyovers and flythroughs. There are even nods to Soderbergh’s Ocean’s 11 with the frequent following of cars from high, behind and close up with locked off distances.

Then there’s the soundtrack, which sledgehammers in the references. Rather than commission new music that merely homages movie classics, Esmail has gone to extraordinary effort to source and remaster the soundtracks to all those movies. I was first sure of what was going on in when Gill Mellé’s Andromeda Strain brilliant soundtrack started showing up, but it wasn’t long before I’d registered The Conversation, Three Days of the Condor, The Thing, All the President’s Men, Chariots of Fire, The French Connection and Legend, to name just a few. Which was offputting, since I spent all my time movie-spotting, but also because the choices often seemed a bit obvious. Man in cubicle solving top-level government conspiracy and a pan back? Let’s do All the President’s Men. Time to visit a sterile, multi-levelled medical facility? Let’s hit The Andromeda Strain. Growing sense of paranoia and suspicion about everyone around you? Dial up The Thing to the max.

That said, and despite the fact they are all far too ‘big’ for the intimate landscape the story creates, they are brilliant to hear all in one and I’d probably rewatch the season just to hear them all again. His direction, too, while homaging the greats is a little less obvious. There are times when a split-screen would have worked very well, for example, and would have been great nods to the original movies. Every time, Esmail avoids doing the obvious and instead deploys those tricks somewhere else. 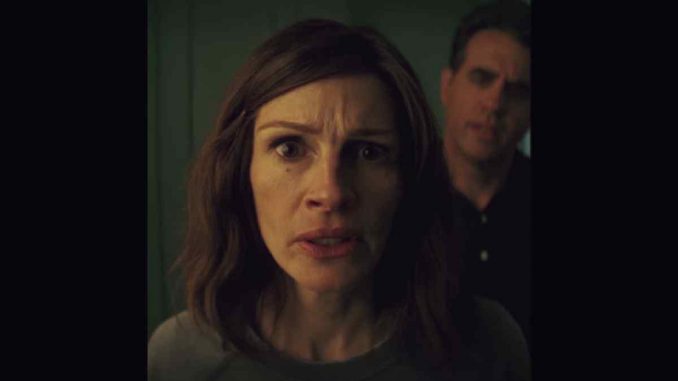 What’s it all about?

However, when it comes to the plot, there’s a certain ‘And?’ about the whole thing. It doesn’t help that the story is stretched out over the season and revealed in dribs and drabs. Initially, those dribs and drabs don’t even bother to make it clear what might be happening – instead, we just watch Roberts and James chatting a lot, while Whigham’s pseudo-Columbo runs around in a cheap mac, chasing people and asking polite questions in a future that looks more like the past. There’s comedy, particularly Whigham’s frequent pratfalls and Roberts-James’ pranking, but like the plot and the character development, it’s all a butterfly presentation case for Esmail’s beautiful directorial flourishes. That means you’ll need a lot of upfront patience.

Over the time, it becomes progressively clearer what’s going on as we’re privy to everyone’s own investigations – you’ll probably guess what’s going on way before it’s ultimately revealed. But it’s such a low-level thing that we’ve seen countless times before, you wonder why we should care. Certainly, as Cannavale himself points out, the fact Whigham is just a cog in an uncaring machine means his investigation probably isn’t going to amount to a hill of beans.

The show is also a musing on the nature of memory, the nature of identity, whether it’s better to live in blissful ignorance or fully informed guilt. Been there, done that, particularly having watched Maniac. So while it’s a decent, thoughtful examination of the issues, as well as tour de force double-header by Roberts and James, it’ll still leave you largely with a big “And?” by the end.

But this is season one of at least a two-season show; it’s also a Sam Esmail production. Naturally, therefore, it’s the final five minutes where everything comes together and it’s the post-credits sequence of the finale that really twists things and makes you understand the show’s far bigger plan. That’s when you start to care and realise what the “And?” is. And how much like Mr Robot it all is.

So here’s your dilemma. If you’re going to watch Homecoming, you have to watch the entire first season all the way to very end. No early bailouts. No quick turn off at the end credits. The whole thing. Every second.

If you can do that, you’ll at least be getting to watch one of the most visually impressive TV shows of any network of any kind anywhere. And getting to hear the best classic movies soundtrack compilation album ever.

I said when I reviewed Tom Clancy’s Jack Ryan that it was the best Amazon original TV show so far, but that wasn’t saying much. Homecoming might not be as exciting as Jack Ryan, but it’s a vastly superior show and the first Amazon show I’d even consider including in a TMINE yearly top ten.

What have you been watching? Including You Are Wanted, Passengers and The Accountant

Mini-reviews of You Are Wanted, Passengers and The Accountant, as well as reviews of 16/5/17-30/5/17’s episodes of American Gods, The Americans, Doctor Who, Downward Dog, The Flash, Great News, The Handmaid’s Tale, Lucifer, Master of None, Silicon Valley and Twin Peaks.
[…]

What have you been watching? Including The Bakkhai, Impastor, Glitch and The Whispers

A review of the TV, films and theatre I saw in the past five weeks