Once in a while on Monday, TMINE will review the select few movies it’s had time to watch when it’s not been watching TV

Not quite the monthly feature I suggested, but probably alternating with Boxset Monday whenever there’s not a boxset worth watching, the alliterative Movie Monday is a new TMINE feature reviewing the latest movies that I’ve watched. Usually that’ll be whatever Apple’s just bunged up on iTunes, but occasionally, just occasionally, it might even be one that’s in the cinemas.

The latest of Marvel’s superhero movies is effectively the Wonder Woman of the MCU, positing a separatist, better-run nation of minorities deciding whether to help the outside world or remain separatists. Here, though, we have the African nation of Wakanda, which turns out to be far more technologically advanced than any other country in the world, thanks to its stonking great stash of miracle metal vibranium, which not only gives them advanced indestructible tech, it also gives some of its plants a certain potency that gets passed on to its king, who protects them as the super-strong, bullet-proof ‘Black Panther’.

Central to the story is T’Chaka (Chadwick Boseman), who’s about to become its new king, following the death of his father in Captain America: Civil War. However, he has challengers, including Erik “Killmonger” Stevens (Michael B Jordan), who believe that maybe Wakanda needs to open up… and perhaps even rule the world.

The plotting of Black Panther isn’t hugely different to that of Iron Man or Iron Man 2, yet nevertheless those movies are a decade and therefore a world apart from Black Panther, with none of those movies’ toxic masculinity. Arguably, Black Panther is less superhero movie, more Bond movie combined with war movie, since there’s actually very little superhero action, most of the movie instead involving undercover attempts to stop arms deals or battles by massed ranks of warriors. Boseman’s sister (Letitia Wright) feels more like a Q than a James Rhodes, dishing out gadgets for our heroes in scenes that could fit into any Pierce Brosnan Bond movie with alacrity.

In contrast to many other superhero movies, too, the antagonist is not only well characterised but often makes some valid points about the treatment of black people around the world, colonisation of Africa by European powers and more. Frequently, you’re tempted to agree with him and wonder whose side you should be on.

There’s a great cast of Americans, Brits and Africans, you come out of the movie feeling psyched up and like you’ve watched something you’ve never seen before in a US blockbuster – go and watch it. 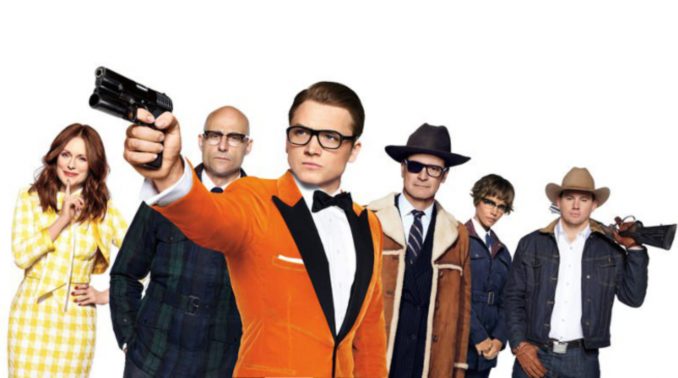 Talking of James Bond, it’s Kingsman – The Golden Circle, an inferior sequel to the Roger Moore-era Bond tribute, Kingsman (2014). After the Kingsman team of English stereotypes get betrayed by a former would-be Kingsman, the survivors seek help from their stereotypically American counterparts, the Statesmen. However, all is not good with their transatlantic cousins, either, thanks to the Martha Stewart-alike Julianne Moore, who has plans for world domination. Can the two teams work together to save the world?

Although generally reviews have been bad, I didn’t think this was too terrible. Most of the headline American cast, which includes Halle Berry, Channing Tatum and Jeff Bridges, turn up, deliver a few lines, then disappear, leaving the real action to Narcos‘ Pedro Pascal. The previously dead Colin Firth is miraculously resurrected, which is a bit silly, but not as silly as the overly long inclusion of Elton John in the cast – a cameo would have been fine, but he gets more to do than Berry et al do.

All the same, some great action scenes, plenty of laughs and a general adherence to a code of honour lifts this above your standard action fare.

Ryan Reynolds is an elite bodyguard who falls on hard times when one of his charges is assassinated. When his former girlfriend, Interpol agent Elodie Yung (Daredevil), is entrusted to protect top hitman Samuel L Jackson, who’s a witness at war criminal Gary Oldman’s trial, she soon finds herself calling on Reynolds to help protect Jackson and get him to the Hague on time, despite Oldman’s best efforts.

Basically, a movie in which Ryan Reynolds and Samuel L Jackson play their usual characters to the max, an interplay that works surprisingly well. The fight scenes, particularly those involving Reynolds, are actually pretty decent, too, and Yung is mildly more tolerable here than she is in the various Netflix Defenders series. However, the rest of the movie is pretty diabolical, offering a stereotypical version of Europe that’s also paradoxically as gun-swamped as the US. There’s no memorable dialogue or scene that will stick with you, just a general impression of Reynolds being sarcastic.

How long does it take before you get hooked on a TV series?

How long does it take before you’re addicted to a TV show?
[…]

Every weekday, TMINE brings you the latest TV news from around the world Internet TV Teaser for season 3 of Marvel’s Daredevil Brenda Strong and Timothy Granaderos promoted to regulars on Netflix’s 13 Reasons Why […]