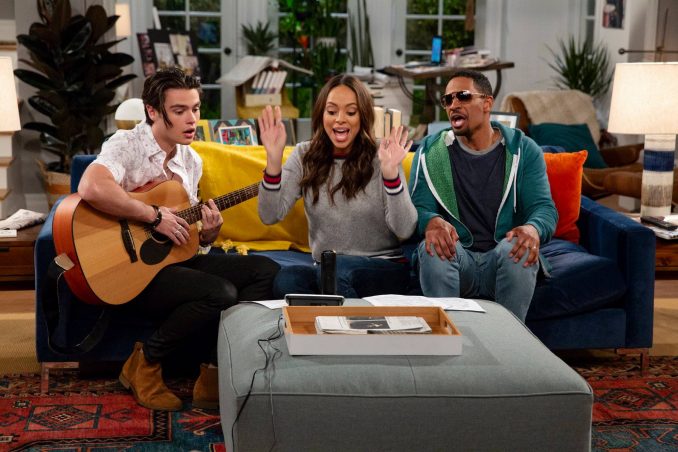 END_OF_DOCUMENT_TOKEN_TO_BE_REPLACED

I foresee a future where ultimately, only Netflix makes TV. All TV you want to watch will be on Netflix and that will be the only TV you get to watch.

How can we stop this? More importantly, should we stop this or is the alternative future so much worse?

Gosh, what a smooth segue into this review of season 3 of Travelers. You barely noticed the bump, did you?

When Travelers started, it was a surprisingly decent, low-key Canadian series on that country’s Showcase channel. Yes, it had some funding from Netflix, but as the show’s star and producer Eric McCormack (Will & Grace) pointed out when interviewed at the time, it was still a show that was proudly Canadian and “Canadian first”. Sure, the rest of the world would get to watch it on Netflix sooner or later, but everyone in Canada would get the chance to watch it first.

However, here we are hitting season 3 and it’s now Netflix-only. No initial Canadian airing first any more. Netflix has assimilated Travelers and made it a true original, rather than a ‘Netflix Original’.

Soon, all TV will be like this. But should this future be avoided? Is season 3 of Travelers any different or worse from the previous two seasons?

Season 3 of Travelers picks up where the previous season left off, more or less. There’s a bit of a time jump but not a huge one and the gaps are filled in pretty quickly.

If you recall, when last we left Travelers, our gang of time travellers had been outed by the very first of their number, Traveler 001: they had been forced to confess to camera that their consciousnesses had been sent back in time by an AI called ‘The Director’ to replace those of present day people who were about to die, in order to prevent the terrible future they’d all come from. Yes, they themselves were about to do what they’d tried to avoid for two seasons and expose their mission to the world – and their new, present-day loved ones. What would happen next, could they stop it and how would it affect their mission? And how would being on Netflix affect the storytelling?

Spoilers after this trailer and the jump.

END_OF_DOCUMENT_TOKEN_TO_BE_REPLACED

Because here’s three of them:

Yep, there’s a new Shaft movie out soon, featuring the original Shaft, Richard Roundtree, his nephew from the 2000 Shaft, Samuel L Jackson and Jackson’s son Jessie T Usher. No trailer yet for the new Shaft, sadly, but you can have these for the previous two Shafts to tide you over.

Not a huge number of new shows or premiere dates, but Walter, Netflix and the Beebs do have a few New Year’s presents for us all.

A semi-autobiographical piece written by and starring Pamela Adlon and co-written by Louis CK, there are good things in Better Things, although that’s more to do with some creative choices than the subject matter or anything especially interesting or funny that happens.

Ever wanted to know what life is like for a 50-something single mother with three daughters, who’s the daughter of a TV producer and who’s an actress living in LA who goes to a lot of auditions and has to deliver a lot of bad dialogue in a lot of bad TV shows? I can’t say I feel a desperate need to know myself, but maybe you’re different, in which case Better Things will be a big help bridging that empathy gap.

Maybe if you’re facing similar issues, you’ll find this funny in a gallows humour kind of way. Personally, I found it just a little bit too self-involved, a bit too much a female Californication but without much joy.

Based on the 2000 blockbuster of the same name, The Crimson Rivers follows conflicted cop duo Camille Delauney and Pierre Niémans. Niémans and Camille are called out all over rural France to solve complex cases which all involve a weird brutality far beyond the capacity of local police departments. The protagonists find themselves infiltrating folktale-like crimes with strong moral and mystic themes, dealing with cults, murder based on family tradition and human sacrifice. An unlikely match, Niémans is a reserved, pragmatic and pessimistic old school sleuth, whereas Camille is bold, brave and not afraid of over-stepping the mark, yet together they make a charismatic and driven duo who will stop at nothing to catch a killer.

In the small village of Djupelv, which straddles the Norwegian/Russian border well within the Arctic Circle, the winters are long and dark. Everyone knows everyone and there are no secrets in this close-knit community, or so it seems. During one of NATO’S winter exercises a dismembered hand is discovered in the river by a local Sami girl.

Thomas, the local police officer starts investigating the grisly discovery, despite firm warnings from his superiors. When the girl disappears and is later found murdered by army officer Mia Holt he becomes even more suspicious that something sinister is afoot. Mia and Thomas continue together in their search for the truth and are forced to look at this small community in a new light. Why are the authorities passive? Why are the locals staying so tight-lipped? And what is hidden up there in the mountains?

The Daily News will return in January. Happy Holidays, Merry Christmas and a Happy New Year!