Yes, it’s Weekly Wonder Woman – keeping you up to date on pretty much anything involving DC Comics’ premier superheroine, including why she’s been hanging around with Batman so much

This week, though, it’s the reverse. So much news. So many new comics.

This week marks four years of Gal Gadot being Wonder Woman in the movie universe. Doesn’t time fly, hey? I think she’s been a success, too, given that Wonder Woman was the most Tweeted about movie of the year; both Gadot and director Patty Jenkins have won NBR Spotlight Awards; Warner Bros has crossed the US$5 billion mark at the box office for only the second time, thanks largely to Wonder Woman; and Patty Jenkins was on the shortlist for Time’s 2017 Person of the Year – to name but a few highlights of the past fortnight.

That was Wonder Woman, though. Justice League ain’t faring so well, although it has just become the 10th movie to cross the $200 million threshold at the US box office this year and earned $370 million outside the US (thanks China!). So it’s made its money back but it’s not up there with Wonder Woman‘s $821 million tally.

Who’s to blame for the movie earning only a few hundred million more dollars than it took to make? The Wrap has a list of its problems behind the scenes, as does Den of Geek, which lays most of the issues at the door of Henry Cavill’s CGI-ed moustache.

People are also curious as to what was in the original script, before Joss Whedon took over and Warner Bros decided to limit the run-time to two hours. Superman’s black costume was in there at one point, as was Darkseid, and Diana originally cut off Steppenwolf’s head (it takes a god to kill a god, remember?). People also want to know what happened in previous attempts at a Justice League movie, with one close effort from 2011 apparently revealing that Wonder Woman and Batman had had a child at some point.

Still, it nearly being 2018 n’all, thoughts are already turning towards Wonder Woman 2. What’s that going to be about? Well, love’s going to feature strongly, according to some sources; however, Patty Jenkins is telling people to dial back their expectations.

Liam Sharp’s been showing off some of his artwork from the forthcoming The Brave and the Bold: Wonder Woman and Batman, as has Tripwire magazine.

Meanwhile, his co-artist on Greg Rucka’s recent run, Nicola Scott, has been nominated for an IGN best artist award for her work.

Talking of Batman, Diana’s set to appear in Batman for a few issues, starting with issue #38 on January 3rd. Supposedly. This is the cover Comixology still has of the issue:

Diana’s also scheduled to appear in Damage #3, judging by this bit of work by Tony Daniel:

The second volume of Wonder Woman: Earth One is now scheduled to be released in August 2018 – I’ll believe it when I see it, mind, given how often Volume 1 got rescheduled.

Diana’s been in quite a few comics over the past fortnight, although not the usual suspects. As it’s November/December, it’s Annual time, and Diana put in a couple of appearances. Less notable was Aquaman Annual #1, which had a Black Mercy-induced vision of the future in which Diana visited Aquaman and Mera’s wedding. Not worth it for Diana fans, obvs.

More notable was an origin story for Injustice: Gods Among Us’s Wonder Woman in that universe’s annual, in which it’s explained why she’s so different from our version of Diana.

It starts of very familiarly – indeed, if you’ve seen Wonder Woman, you can see what’s being referenced immediately:

But there are differences, not the least of which is that this is all set during the Second World War. 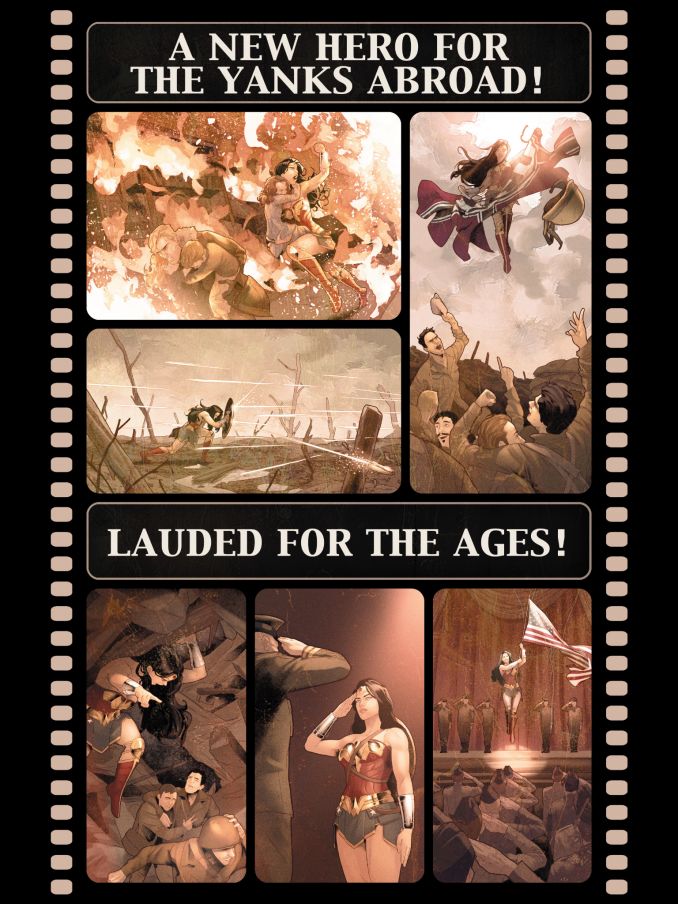 She also left home without the lasso of Hestia. When she goes back for it with Steve, a deep dark secret gets revealed – Steve’s a German spy!

Naturally enough, that left a mark on this Diana’s psyche which lasted quite some time…

It’s an interesting read, certainly the best written and drawn of the Injustice comics that I’ve read. If you like an Elseworlds tale involving Diana, this is a good ‘un.

But as well as Annuals, this is the time of year for Christmas specials and DC’s yearly (nay annual) New Talent Showcase as well.

Diana only appears in one story of this. However, given that the writer is Greg Rucka, don’t be surprised it’s a goodie. Be more surprised that it’s yet another Batman-Wonder Woman story. What’s going on here?

Diana helps people while Bruce fights crime. Then they light a bonfire together on the solstice.

Obviously the fact they’ve been doing their solstice ceremony together for many years suggests this is set in the future, of course. Largely, though, it’s all about comparing Diana’s light and Batman’s darkness. I’m not convinced Rucka actually manages to justify Diana’s statement: “But you and I have a more intimate relationship with darkness.” She literally spends the issue helping people and nothing but.

"See all that stuff in there, Zack? That's why your Batman and Superman movie never worked!" pic.twitter.com/tPmSce459G

King manages to make his point, whereas I don’t think Rucka does. Still, it’s always good to have a Rucka story and he does write Batman and Wonder Woman well together.

DC has a funny definition of new talent, since this special – a follow on from last year’s – features a story by Scott Snyder. Said story is, naturally enough, the one about Wonder Woman.

Despite my worst fears, given Snyder’s normal inability to tell a story that needs (but never includes) 17 footnotes and citations to explain the continuity references and most of the plot, this one is all right.

It’s basically a story all about Diana’s… wonder. Or the fact she wonders, anyway. Strand A is in the present day, with Steve Trevor taking Diana to the secret government vault that contains all the magic things it’s been collecting for 200 years or so. It appears to be behind a disused Stargate, too, judging by the symbols round it.

Strand B is a flashback to Diana’s childhood, which is where her wondering nature first becomes evident.

All of which is very nice and quite fun, but ultimately never earns its conclusion:

Presumably, Diana’s curiosity about the weapons and the magic belt in the storeroom has been rewarded, as she can then use them to kill the giant beastie. But it’s not clear what the weapons do or why Diana wouldn’t have been able to tackle the beastie without them. Or if she’ll get to keep them afterwards.

So this new talent Scott Snyder seems promising, but he needs a bit more practice, I reckon.

This one came out a month ago, but I missed it. Sorry. So I thought I’d sneak it in now, particularly since it’s an ongoing story that will be continued in the next issue.

A group of really radical feminists has come up with a poison that kills only men, leaving all the superheroines and supervillainesses to gang up to fight misandry.

Fight a bit. Get confused by some gas.

Essentially, just an issue in which feminism and misandry get discussed at length, with Wonder Woman appearing because she’s female, not because she has anything to add to the debate beyond her presence. She certainly doesn’t get to use any superpowers, such as flight or super-speed, that might have helped in a gas cloud. Oh dear.

Terrorists need to be stopped. Sounds like a job for the Justice League! Except Batman’s Spanish is rubbish and a nun ends up getting killed. Oh dear.

Go undercover as an Australian postwoman.

Take out a terrorist while correcting his theology.

Protect some hostages from an FBI cock-up:

Lose her sword so it can be used by a terrorist to kill a little old nun.

Well, much as Star Wars saw Princess Leia (just had her whole planet destroyed, including all her adoptive family, after enduring days of torture at the hands of what turns out to be her real dad) having to comfort Luke (lost his old mentor pal of two days), here, it’s all about how Bruce Wayne feels.

Poor old Bruce. Puts himself in charge of the Justice League, spreads himself thin between that, the Justice League of America and all his Bat franchises, and then misallocates the team members because he doesn’t realise Aquaman might be helpful in a coastal location. Guest what? Things go wrong.

Meanwhile, Diana loses her back-up, has to fight the terrorists single-handed, then gets blown up and has to see a nun gutted with her sword right in front her after losing it in the explosion, all while she’s looking after some now-traumatised children.

But yeah, let’s dwell on Bruce.

Still, not a bad start by writer Christopher Priest and there’s some good artwork, too. Diana’s super-powers are downplayed, but at least she has some, and reminding the reader that she has an accent – which naturally everyone thinks is Australian – is a nice touch, too.

But I’m not that interested in a series in which we have to watch Batman crying some man tears over his terrible situation. Gosh if only there were some far better qualified person with the best training in fighting, military strategy and leadership that the world had to offer, hey?

Still, you never know – given the success of Wonder Woman, the outcome of this story might surprise everyone. Let’s see.