The talk of the past week has been all about the new Wonder Woman movie. Again. Although, to be fair, we have had a rather impressive new poster (above) and a rather shiny new trailer to mull over.

Lots to discuss in that, obviously, although Diana flying, Dr Poison et al have all been hinted at elsewhere:

Elsewhere, Greg Rucka and Liam Sharp’s run on Wonder Woman is currently part of an exhibit at the Israeli Museum of Caricature and Comics in Holon, Israel. And if you’re a big buyer of cereals, now’s the time to switch to Cheerios in the US, since they feature a whole bunch of DC comics and artwork, including Diana as drawn by Neal Adams.

And on TV, NBC’s Powerless not only revealed Themyscira’s (current?) time zone…

…it also hinted that the technology used in Diana’s invisible plane is being made available to the manufacturers of children’s toys.

After the jump, a look at the latest DC comics to feature our Diana: Wonder Woman #18, Batman ’66 Meets Wonder Woman ’77 #8 and Justice League/Power Rangers #3. But not in that order.

Justice League Power Rangers #3
Plot
The Justice League and Power Rangers agree to team up to fight Lord Zedd’s giant creatures. Unfortunately, Brainiac is helping Zedd and he’s able not only to take over the Power Rangers’ giant robot dinosaurs, he steals their communicators and coins, turning them into regular teenagers again.

Only one thing for it – use the Large Hadron Collider to create a hole to the Power Rangers universe to fight Zedd and Brainiac on home territory.

What does Diana do?
Punch things a lot…

…say ‘Great Hera’ and save the Power Rangers when Brainiac takes over their vehicles.

It’s also pointed out that whatever version of Wonder Woman this is (maybe the Rebirth one, but who knows) once again has ‘the wisdom of Athena’, just like in the olden days… 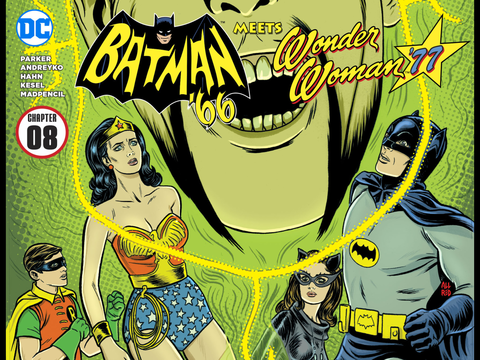 After Drusilla and Ra’s al Ghul are revealed to be equally matched swordfighters, it’s left to Diana to repay the favour:

When Ra’s tries to escape on a boat, first Batman and then the Amazons try to stop him – and it turns out that Diana’s not the only one who wears that swimsuit:

Then everyone goes off to celebrate and dance the Batusi:

Extra notes
What’s really surprising about the issue, apart from the lovely nods to Wonder Woman continuity, is the air of finality it has for Batman ’66. So far, this strip has been set either way before or in the Batman ’66 and Batman timeline. But by the end of this issue, Batman is revealing his true identity to both Diana and Catwoman:

(Interestingly, the strip here suggests that the reason this Batman is so lacking in darkness compared to his other comic book selves is that he was inspired by his meeting Wonder Woman as a child, rather than by a bunch of bats in a cave.)

Meanwhile, Talia is imprisoned by the Amazons and Catwoman seeks asylum from patriarchy with them, rather than return to Gotham and prison:

And while the story seems to be over at first, the final page suggests not only that there are more issues to come, but that we’re going to be seeing what happens 11 years after Batman ’66 in proper Wonder Woman ’77 territory. What will have become of Bruce Wayne and Dick Grayson by then, I wonder?

Wonder Woman (Rebirth) #18
Plot
A year after the events of issue #16, Veronica Cale’s managed to resurrect her friend as Doctor Cyber…

…who then keeps Diana busy…

…so that she doesn’t notice that Barbara Minerva has become… Cheetah!

Extra notes
What’s most important about this issue is actually outside the main plot. Although knowing exactly how Cheetah became Cheetah in Rebirth continuity is fun to watch, we knew most of the details already. Plus Dr Cyber doesn’t seem that much different from Cyborg in this continuity, just a bit more virtual, so it’s not that exciting seeing her in action for the first time.

No, firstly, we get an exact statement about Diana’s feelings towards the gods in the Rucka/Rebirth continuity:

Which ones does she love? Maybe we’ll learn that later.

BTW, when we go into double-speech bubble territory at the end, it’s because they’re speaking Amazon – the observant will notice on the first page that Diana still hasn’t mastered English, with present continuous tense proving surprisingly tricky for her still (wisdom of Athena, huh? That’s literally the easiest tense in the entire English language):

Also worth noting here is

Secondly, we learn a little more about Phobos and Deimos are up to:

Sounds like after Ares was defeated by Diana and the gods, the gods imprisoned him under Themyscira. Now the dreadful duo want to rescue Ares from his prison so they can do nasty things to the world. But to do that, they have to know where Themyscira is.

Lastly, it’s actually the first issue where it’s possible to feel sorry for Veronica. Well, when you consider what’s happened to her daughter, which is actually heart-rending…

As Diana says, attracting the gods’ attention isn’t a thing you want…