As I prepare to take a week off next week, I note the happy timing – this is precisely what’s happening at DC for the next month or two. Yes, the publisher of Wonder Woman comics is off taking a break as it moves offices from New York to Los Angeles, so as to be better geared up for movie/money synergies.

While everyone’s filling boxes and the likes, no one’s going to have much time for that editing and printing lark, so in the place of the regularly advertised comics, we’re getting the BIGGEST EVENT EVAH!

It’s not really the biggest event ever, you know. Initially, it was going to just be a sort of Sensation Comics writ large for all the DC titles, with a whole bunch of stories set in previous continuities (Golden Age, Silver Age, Post-Crisis, Kingdom Come, Red Son et al) showing up on the shelves for a month or so, just for fun. Except now it’s all been tied in with something involving Brainiac, with Flashpoint Aquaman fighting pre-Flashpoint Justice League and the like, and it’s all going to be important and mean stuff and probably end up with everyone wearing new costumes or something.

In preparation, Sensation Comics has gone on sabbatical, and is set to return on the 23rd April; in its place, we have the return of Wonder Woman ’77, which aptly enough, also appears to have some parallel universe fun going on.

And while Justice League proper is taking a break, too, this week we’ve been left to enjoy new issues of both Wonder Woman and Superman/Wonder Woman, in which Diana chats a lot and takes up a new hobby. Treasure them – they won’t be back until June, now.

Wonder Woman #40
Plot
Wonder Woman and Donna Troy are gassing on while twatting each other with sticks sword-fighting but before anything plot-resolving happens, they’re interrupted. Diana agrees to a challenge in two days’ time to sort out the issue of whether she’s queen or not. 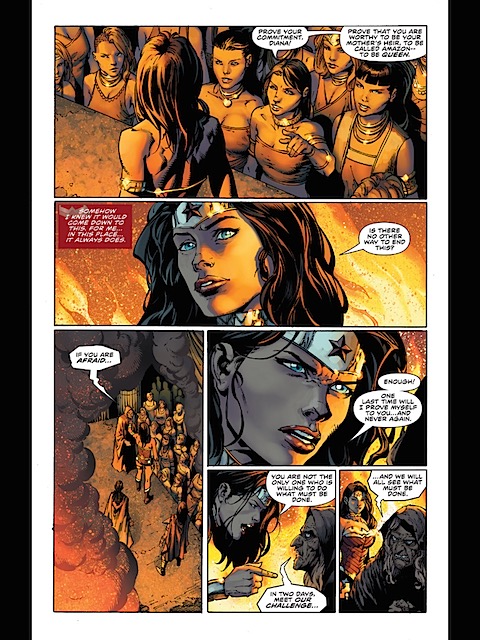 …and then her boyfriend, Superman.

She then goes off with the Justice League to work out what’s going on with all those bugs. Turns out they’ve been stirred up by the First Born being returned underground.

But while all that’s happening, Donna Troy and the female Amazons are busily killing all the male Amazons.

Is it any good?
It’s all right. The art’s good, with Brian Finch settling on an intermittently beautiful style that only occasionally falters on women’s faces. The bringing up of the First Born is unexpected and gratifying. There are traces of humour, even from the sometimes humourless Wonder Woman. And things happen – the plot gets advanced, Donna Troy gets more firmly established and we have some character moments for Diana, including one with the Big Bat himself.

The trouble is it all feels a bit generic and flat. To some extent, that’s because it’s part five of a six-part story. But it’s also because too much time is spent chatting. While it’s good to have Diana’s viewpoint again, everything’s so unnecessarily verbose, with nothing much happening after all the chatting.

The whole thing really needs someone like Roger Corman to come in with a big red pen to cross out all the constant repetition, worrying and generally un-Amazonian behaviour, and pare it down to the absolute minimum needed to tell the story.

It could also do with writer Meredith Finch reading everything out loud, because yet again we have someone revealing who Donna Troy is but no one turns round and says, “Wait, what kind of name is ‘Donna Troy’ for supposedly the most Amazon Amazon of them all?”

But the title seems to be properly setting down now with its new creative team and it’s still one of the best of the nu52 titles. I just wish we could somehow combine Brian Azzarello and Meredith Finch’s writing styles – then we’d see something truly wonderful.

Superman/Wonder Woman #17
Plot
With Superman under Circe’s control, Wonder Woman is forced to fight him, which she does very well – at first.

However, eventually she has to make a choice – save Superman but not the civilians she’s left behind or rescue the civilians from Magog and see Superman come under Circe’s control forever. Naturally, Diana chooses to save the little people first.

Of course, being Wonder Woman, she pulls off a miracle, first defeating Magog, then her lasso restoring Superman to himself.

Later, drama over, Wonder Woman decides she needs a way to ensure she never forgets the little people – so she takes a leaf from Clark’s book and takes up writing.

Is it any good?
Again, another not especially remarkable piece. It’s not awful and it has a few good twists, but at the end of the main action, you don’t feel like you’ve seen anything you’ve not seen before. Lasso brain-fix? Check. Superman/Wonder Woman outmuscling a trap? Check. Superman/Wonder Woman making a sacrifice to do the right thing, that ultimately turns out not to be a sacrifice? Check.

Indeed, in common with Wonder Woman #40’s overwriting and over-explaining, Peter J Tomasi’s gives us not just a grandiose Superman and Wonder Woman who need to explain the plot to one another…

…but a Circe who spends all her time either explaining the plot to everyone or monologuing about what she’s going to do but never actually does.

It’s again the kind of monologuing, grand-standing and verbosity used by a writer who doesn’t rely on the artist or the reader enough to convey and understand the story without it being constantly explained in the dialogue. The result is clichéd, hackneyed and something no one could ever say out loud with a straight face – supervillain or not.

Where are the red pens? On their way to Burbank, by the looks of it.

Still, if you ignore the bulk of the dialogue, it’s a decent slug-fest, with some good scenes of carnage. The end scene of Wonder Woman taking up writing is something that adds to her and ties in quite neatly with pre-nu52 continuity…

…and the artwork really ends up quite good in places.

Nevertheless, compared to Charles Soule’s auspicious opening story, Tomasi’s debut has been “comic books as usual”, coasting by on the return on previous characters going through the same old motions, rather than any truly original or innovative thinking.

Here’s hoping that a couple of months off will give everyone a bit of inspiration.

Wonder Woman ’77 #4
Plot
Diane Prince wakes up after fainting! What can be going on?

When she hears a call for help, she tries to become Wonder Woman, but can’t!

Because someone else is Wonder Woman!

When she tries to tell Steve Trevor, it turns out he’s not feeling quite himself, either.

So she returns home, only to find… her family!

Is it any good?
It’s all a bit of a treat, really. Indeed, this was pretty much the comic most people were hoping for when it was announced, not the disco inferno edition of the first three issues.

Firstly, there’s a huge improvement in the art, to the extent that every frame looks exactly like the actor in question, whether we’re talking Lynda Carter or Debra Winger. Because, as you might have noticed, we have some acknowledgement of TV continuity, including Wonder Woman’s sister, Drusilla aka Wonder Girl…

While the alternative Wonder Woman and Steve Trevor aren’t quite Cathy Lee Crosby and Kaz Garas, they’re pretty close, implying that’s who writer Marc Andreyko is getting at, even if maybe DC doesn’t have the likeness rights:

Has Wonder Woman woken up in the parallel universe of the 1974 TV movie? Or is something else afoot? Whatever the case, it’s an interesting question, asked in an interesting way, without epic over-writing. I loved it!

A review of Wonder Woman #26

Every week (or fortnight) At least once a month, Sometimes, Weekly Wonder Woman keeps you up to date on everything involving DC Comics’ premier superheroine Yes, it’s back, the least correctly titled feature of TMINE, or […]