So it was the best of times and it was the worst of times at Superman/Wonder Woman last week. On the one hand, after months of the interminable ‘Superman Doomed’ storyline, things finally returned to normal, with writer Charles Soule once more being allowed to devote his attention to the Power Couple with a characteristically joyful little piece in issue #12.

On the other, Soule recently signed an exclusivity contract with Marvel, which means that his reign on the title is at an end.

And there was much wailing and gnashing of teeth.

After the jump, then, we’ll look at Soule’s final issue, we’ll ask just how different from our Earth – particularly London – the DC Earth might be, and we’ll finally find out why Wonder Woman likes ice cream so much.

Also arriving in London last week was Sensation Comics Featuring Wonder Woman #9, together with a noted American master criminal – a certain Ms Selina Kyle aka Catwoman. More on what happens when she meets a very sleepy Wonder Woman after the jump. 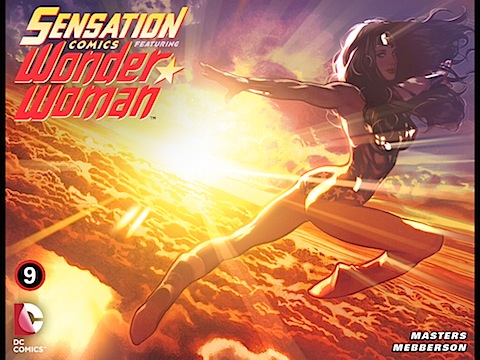 Superman/Wonder Woman #12
Plot
We join the story in medias res, just as Wonder Woman is finishing off Giganta in Wembley Stadium no less. But who’s this coming fresh from a black hole somewhere nearby? Is it a bird, is it a plane? No, it’s Superman… with a beard.

He also appears to have grown taller compared to Wonder Woman, but I guess that’s gravitational tidal stresses for you.

This annoys Clark, who thinks that if you give your girlfriend a gift, she should take care of it properly. This in turn needles Diana, who has had her hands full leading armies and dealing with a boyfriend who’s turned into a spiky monster.

A reasonable squabble for a normal couple to have? Maybe. But there’s no normal for either Wonder Woman or Superman. So while Diana is off sorting out her half-sister Strife’s attempts to stir up the argument between the two of them…

…Superman is left looking for a peaceful way to sort out his flower, which is now attacking North Sea oil rigs and could possibly destroy the entire world’s oil distribution system. Naturally, he turns to the god of plants, Swamp Thing.

Except Swamp Thing isn’t so sure that a flower that destroys oil and all the problems that brings is a bad idea.

Except Wonder Woman knows a thing or two about war, being the goddess of it n’all, so points out that Bad Things will happen if there is no oil, which convinces Swamp Thing.

That just leaves the Power Couple to make up after their spat. Which they do… on the white cliffs of Dover, no less.

Actually, it’s going to be next month, now I think about it.

Is it any good?
Charles Soule is going to be sorely missed, not just on Superman/Wonder Woman but at DC*. Just take a look at this issue – in the space of just 20 pages, Soule effectively recaps his entire run on the title and even references a Justice League or two, gives Wonder Woman a chance to interact with one of her enemies, gives Superman a chance to interact with something Kryptonian, touches on both Wonder Woman and Superman’s relationships with other characters, and adds to both their mythoses. All while actually fleshing out them and their relationship. There aren’t many writers that can do that.

True, we have entered a mysterious parallel universe London in the process, one where North Sea oil is directly connected from rigs to the mainland without intermediate refineries. It’s also a London where not only do cars have steering wheels on the left, Esso petrol stations aren’t self-service and still have attendants for their mysteriously American-looking petrol pumps.

That minor page of pedantic niggling aside, the rest of the issue is a veritable delight. After Clark has been off in other titles, wondering whether to be Superman any more, mysteriously visiting everyone who isn’t Diana while he mopes around in his apartment, it’s good to see him coming back to his girlfriend to verify that in fact, yes, he’s not dead (only in comics, hey?).

The quarrelling, despite being Strife-induced (isn’t all bad strife?), rings true to many a relationship quarrel in both Clark and Diana’s responses, even if few such quarrels involve “I was off fighting Brainiac” as a defence for not watering oiling a flower. And the resolution to the flower power crisis is deftly handled, giving us a respectful meeting of two gods (I wonder if Swamp Thing and Demeter have met yet?) that’s true to everyone involved.

On top of that, we get some lovely relationship moments. As well as their joyful reunion at the start of the issue and their reconciliation and romantic sunset together at the end, we have some actual almost sexy fun times that take the previously somewhat chaste-seeming relationship up a gear.

On top of that, we finally solve the mysterious issue of why Wonder Woman likes ice cream so much. This is something we first learned about in Justice League #3:

And that could have been it. But it’s also something that Justice League: War was happy to repeat.

So what’s up there then? It turns out that basically, despite Diana having been in London for so long she effectively became Diana Rigg in The Avengers a while back, she grew up a proper Greek girl on Paradise Island – with a corresponding diet.

Ice cream? It’s not just ice cream. She loves fish and chips, too. Can you imagine?

But that’s it. So long Charles Soule. You’ll be missed. You were here too briefly and even then, the latter half of your run was unfortunately dominated by both the ‘Superman Doomed’ and ‘Futures End’ crossovers. You did your best with those, giving us by far their best issues, but some things you just can’t polish.

All the same, in your brief time, you did more to give both Superman and Wonder Woman real depth and nuance than their own titles have done since the nu52 started, especially Wonder Woman. You gave us a balanced relationship of equals that allowed both characters to shine. I wasn’t a Superman fan at all when I started reading Superman/Wonder Woman, but I was by the end.

Let’s just hope your successor, Peter Tomasi, is as good. I’m faintly optimistic, given how well he handled Wonder Woman in the recent Batman and Robin issues in which she appeared. But Soule’s going to be a hard act to follow.

* Mildly off topic, but read his She-Hulk title, too, because it’s great, just in a different way.

Sensation Comics #9
Plot
This proves to be an even lighter affair than Superman/Wonder Woman – a super breezy piece in which Catwoman comes to London to extract the Golden Fleece from the vaults of the British Museum.

The Met call in resident superheroine Wonder Woman to help. If only she’d had her coffee that morning.

It turns out that the Golden Fleece is still protected by a monster, something Catwoman was never up to defeating, but which Wonder Woman might have the chops for.

Hoping to make a quick getaway, Selina is nevertheless apprehended by Diana, who’s onto her ruse.

Is it any good?
It’s a 69p piece of fun. Compared to Sensation Comics #8, which was in part a musing by Golden Age Wonder Woman on her religion and its compatibility with a multi-faith universe full of other gods and goddesses – complete with a guest appearance by Deadman fresh from Nanda Parbat and his patroness Rama Kushna – this adds precisely nothing to our understanding of the character. There’s no philosophy, no Etta Candy or other old school Wonder Woman characters to draw on. It’s just a throw away bit of fluff.

But that doesn’t matter. At all. Because it’s just for fun. A joyful, almost young adult bit of fun, drawn like a web comic in places, in which Catwoman and Wonder Woman meet, tussle, and everything is sorted out in the space of an issue.

Rating: 5/5 but in a very different way from Superman/Wonder Woman.

The news for Monday 9th December 2013