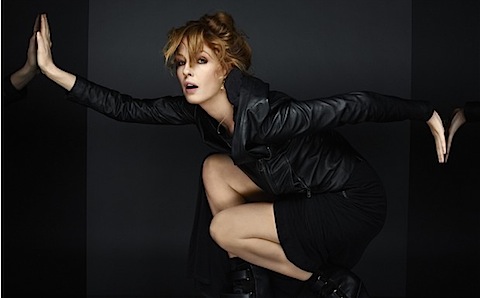 Mental health is so hot right now. I don’t mean that in the sense that it’s a subject for serious examination in drama or that it’s something that is thoughtfully used in characterisation. I mean it’s a great gimmick.

Time was when dramas would have set-ups like “two brothers are private detectives”, “he’s a Vietnam vet with a super helicopter”, “he’s an angel wandering the Earth helping people” and the like. But you can only have so many of those unique set-ups before you start to repeat yourself.

Mental health issues, by contrast, used to be the motivations for crimes, not something that could affect a hero, because it was unmanly. Well, maybe PTSD so they could have really manly flashbacks to Nam.

Thankfully, those times are gone and it’s all change. With first Monk giving us the OCD detective and then Touching Evil giving us the slightly lobotomised detective, TV has worked out how valuable these personality quirks can be. Why, right now, on TV we’ve got Asperger’s aplenty (Community, The Bridge, Hannibal, Parenthood) and the new top, post-Silver Linings Playbook condition, bipolar disorder, has been jaunting around both Homeland and Mind Games, giving them all sorts of entirely medically accurate depictions of how helpful mental health issues can be.

Producers have also worked out thanks to medical shows such as House, Mental and 3lbs that ‘brain weirdness’, to use it its technical definition, can be really entertaining in guest characters as well. So what better than a show that features not just lots of supporting cast weirdness but also a central character who has the bipolar, hey?

Black Box is such a show – and it turns out that despite its having not just the delightful Kelly Reilly as the lead as well as no lesser actress than Vanessa Redgrave as her psychiatrist, a whole lot of things could be better.

Reilly, putting on her best US accents, is a talented neurologist/doctor who is also bipolar. As long as she’s on her meds, she’s fine, but believing that medication stops those with mental health issues from achieving their true potential or even being truly happy by coming to accept themselves, she has a history of ‘non-compliance’. The result is that sometimes she’s manic and productive, other times she’s crazy, hallucinating, doing all kinds of bad things, including almost committing suicide. Yet somehow it makes her a better doctor.

Gosh, how quirky and interesting. Gosh how almost unwatchable.

About
The twenty-first century is the era of the brain, and this show will be riding that wave on the cutting edge of medicine. The brain is the source of everything — from whom we love to how we act and feel. It is the ultimate mystery, which is why doctors call it the “black box.” Dr. Catherine Black and the staff of “The Cube” will constantly be challenged by cases never seen before on television. The patients have rare, highly visual, often hallucinogenic and startling conditions, which we will see through their eyes as Dr. Black diagnoses and treats them.

Is it any good?
It’s just horrible in pretty much every way possible for a show to be horrible.

First there’s the acting. Redgrave has a little to do but be gruff and Reilly, who’s normally pretty good in UK TV and theatre productions (e.g. Above Suspicion, A For Andromeda, The Master Builder, Sexual Perversity in Chicago), delivers a performance that’s more improvisation class (“Imagine you’re an acorn! Now a dancer! Quick, Kelly! Quick!”). She alternates between seemingly half-drunk and slightly maudlin and pained, never really showing us a character who’s supposed to be ecstatically happy half the time – even her happy seems sad. And as a doctor, she has terrible bedside manner: patronising towards older patients and talking to them not only like they’re children with IQs of about 50 but like she’s one, too.

On the other hand, she’s required to do an eminently bizarre collection of things to show how quirky she is, dancing away, hallucinating and more, all of which makes you want her to go back on her meds as soon as possible. Working out how to be a doctor in such a situation must be tricky to say the least.

Or maybe she’s just been put off by the atrocious dialogue that she’s expected to deliver, which has all the subtlety of a fog horn in a library and appears to have been assembled by cutting random pages out of previous medical shows’ scripts, throwing them all in the air, and then assembling them into an entirely random order afterwards.

The show does in theory have a good message: that those who are ‘abnormal’ are not necessarily broken and in need of fixing, but may be happy in their own skins and being different. It also has a very slight dialogue about whether that’s still true in the case of those who are going to be a danger to either themselves or others if left untreated.

Unfortunately, that message is handled in the most shallow way possible. Reilly’s character is clearly liable to destroy her own life and the lives of everyone around her, if not through her actions then through her dreadful lines, so is obviously in need of medication; everyone else has minor quirks – Look the old woman has an imaginary friend! Look, the student who was going to study a scientific subject at university now likes art! – that are just designed to make the audience go a bit dewey eyed and question whether real-life doctors and psychologists with actual training are really just bastards who don’t care.

As much as I’d love to love a Kelly Reilly show, one that tackled mental health issues in an adult manner, this is basically just a badly written female House with a subset of its medical conditions. All the efforts of the writers have gone into her character – and by character, I mean bipolar disorder, since she has few character traits outside of that – leaving the supporting characters with nothing to do but talk about her bipolar disorder or be shagged by her (not Redgrave).

Teaser trailer for season 3 of Bron/Broen aka The Bridge

A teaser trailer for season 3 of Bron/Broen/The Bridge
[…]

In the US: Wednesdays, 9/8c, CBS Well we’ve seen how the amateurs do it – now it’s the turn of the pros, because following NBC’s efforts at doing manly special forces operations with The Brave, […]

The news for Wednesday 2nd September 2015