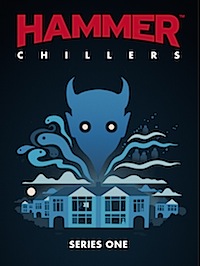 So here’s something interesting and new. Bafflegab Productions, which recently launched the Vince Cosmos audio play series, has developed a new series of horror plays for Hammer, which feature the likes of Stephens Gallagher and Volk. Here’s a press release:

Hammer has announced a partnership with audio specialist Bafflegab Productions to launch ‘Hammer Chillers’, a series of original audio dramas, which will be available as six weekly downloadable episodes from June 2013.

Episodes are available to pre-order now at www.hammerchillers.com ahead of the 7th June release and are priced at £2.99 per episode. From the end of July, fans can also download the entire series as a package and order the series on CD which will include bonus material.

Writer Stephen Volk said: “Hammer films have been a massive influence on my writing from the days when I sneaked into the White Palace cinema in my home town of Pontypridd to see the likes of The Devil Rides Out and The Vampire Lovers. Now to be writing an audio drama under the Hammer banner is a dream (or nightmare!) come true.”

Simon Oakes, CEO and President of Hammer Films and vice-chairman of Exclusive Media commented: “Hammer Chillers are a fantastic addition to the range of quality original content that we strive to produce and we’re excited to welcome such celebrated authors to the Hammer family.”

Bafflegab Productions Executive Producer Simon Barnard added: “Hammer Chillers will be every bit as terrifying as their celebrated cinematic counterparts. We are proud to partner with Hammer and hope that our tales take listeners on supernatural journeys that will make them afraid to turn off the lights afterwards.”

You may have noticed that because I’m operating at my normal speed, that means the first episode, The Box, is already available to download. Nevertheless, review after the jump

About
The culmination of the Wainfleet Maritime College sea rescue and safety course is a session in The Box, an underwater helicopter escape simulator. The candidates are ex-navy or air force, and The Box should be an easy exercise for such experienced men.

So why are the drop-outs gradually increasing in number? Men are seeing things when they’re submerged, and won’t talk about them when they come out…

What is the secret of The Box?

Is it any good?
It’s not half bad, actually. It’s lean, not especially mean but still reasonably scary, and although you’ll spot most of the tricks and explanations a mile off, it’s an enjoyable ride.

Rather than be a narrated story, this is a ‘full cast’ drama, largely revolving around Con O’Neill’s training instructor as he tries to work out why one of his most recent students is too frightened to return to what should a very simple practical exercise. He does a little detective work with the student’s sister, gets given hints of a scary tale before eventually he, too, decides to the enter the Box. Suffice it to say that personal demons can take on lives of their own.

And it’s all pretty well done. Stephen Gallagher’s an old hand and this quite traditional bit of horror goes neither too quickly nor too slowly. The cast are pretty decent – Con O’Neill was St Peter in the recent History Channel The Bible. The production’s good and is on a par with a decent Radio 4 play, quite effectively conveying the claustrophobia of the Box. The music’s pretty good.

There aren’t any vampires in it, true, but then there always was more to Hammer than Peter Cushing and Christopher Lee.

It’s nothing extraordinary, so don’t expect anything hugely innovative, but it’s good. £2.99 for a whole half-hour play is bargainously cheap and miles better than certain plays that’ll set you back £14.99 a whack, so if you like chillers – rather than in-your-face gore – grab this immediately.