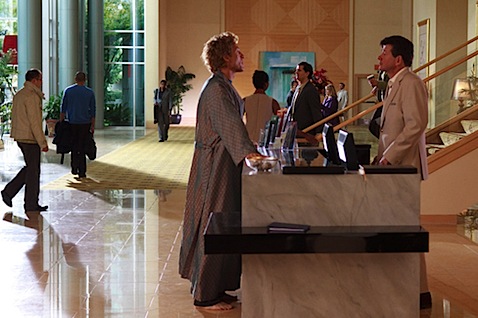 “If the art of the detective began and ended in reasoning from an arm-chair, my brother would be the greatest criminal agent that ever lived.” – Sherlock Holmes describing Mycroft Holmes in The Adventure of the Greek Interpreter

It seems that no matter where you go in North America, more and more cable channels (and even Netflix) are reckoning that the key to getting good ratings and making money is to actually make TV programmes rather than simply air re-runs. HBO, Showtime, AMC, Starz: they’re all at it.

Canada’s no different and with CBC currently suffering budget cuts everywhere (and churning out crud like InSecurity instead of The Border ), we have to look to lovely subscription TV to find bolder attempts at quality TV.

Showcase, which has been having a brave stab at quality (with varying degrees of success) with the likes Lost Girl, Blackstone, Moderation Town, Cra$h & Burn and Haven, has now waded into the problematic world of detectives. I say problematic because there have been so many detective shows already. As a result, detectives in TV shows need to have quirks to stand out from all the others – that’s the law. Everyone knows that.

So let’s add to this mix a very unique detective: Arkady Balagan, a Russian chess grandmaster with agoraphobia. He can’t leave his hotel so wanders around in his pyjamas and dressing gown all day. He’s also a bit of an a-hole – is that why the KGB have been trying to kill him? But because he needs to pay his hotel bills, he starts solving crimes to claim the reward money rather than because of any sense of altruism.

And he turns out to be quite good at it.

Cue the trailers, one with a particularly funky bit of music, one with a bit more explanation.

Plot
He was born in the Soviet Union but escaped when the Berlin Wall came tumbling down. He rocketed to international chess stardom after winning a string of tournaments, all played at blitz speed. Arkady Balagan soon became World Champion and one of the most legendary chess players of all time.

Balagan came to Vancouver, the hometown of his fiancée, Rosemary, to take part in a tournament. Rosemary was going to lunch with an old friend. As they waved goodbye, a vehicle drove up. He watched as Rosemary died in a hail of bullets.

The local police said it was a case of mistaken identity. Balagan became traumatized; convinced he was the real target. It was Vladimir Putin’s revenge for Balagan having given millions to the pro-democracy forces in Russia.

The potent combination of guilt, grief and fear made Balagan unable to leave the hotel. And so he was stuck inside for months, eventually running out of money. A boy is missing and Balagan makes an off-hand observation that turns out to be true. Soon one of the fathers, under suspicion from the police, is pleading with Balagan to help solve the crime. Bored with his life in the hotel, broke, and eager to help, Balagan agrees and to his own surprise, he soon figures out who has the boy.

Thus he earns a reputation for solving mysteries and figuring out the impossible. Each week, people come with problems that have stymied the police, or problems that they cannot even bring to the authorities.

He has two confederates who do his leg work – Sam, a grad student and chess fanatic, and Alcina, a hotel maid from Guatemala. Danni, the hotel bartender, is his source for information and contacts, as well as an ear for his theories.

But the trick is that though Balagan cannot leave the hotel, he solves the puzzles in his head. Literally. He can imagine events, interview the living and the dead, go over every permutation and combination of events. He imagines it one way, then another; and we have the privilege of entering his mind and seeing it all with him, until finally he figures it out.

During all of this Balagan is also trying to figure out who killed Rosemary and why. With the assistance of her sister, Pippa, he explores many theories, but to no avail.

So the question remains: Why can he solve every case – except his own?

Is it any good?
To use the wrong sporting metaphor, it’s a game of two halves. The first episode is really good, very entertaining. It’s imaginative, fun, clever and funny. It uses some interesting devices. The cast work well. It doesn’t quite have the 100% niceness quotient that some Canadian shows have – although it does have a kid abducted from his two gay, divorced dads. And the lead character is very engrossing, even if none of the supporting characters are, although at least they have something to do – like being Balagan’s Baker Street Irregulars.

It does have a few problems: the murder of Balagan’s fiancée is a slightly tiresome ongoing plot thread; Shawn Doyle, who looks like a blond Peter Serafinowicz, doesn’t quite have the Russian accent down pat but is nevertheless very good; Balagan is stereotypically Russian (vodka-drinking, chess-playing, fatalistic, arrogant) but he’s charming nonetheless; the supporting cast have bland characters to deal with and/or are bland themselves, with a couple of exceptions; and there’s no real link between Balagan’s chess-playing strategising and his emerging skills as a detective – they appear out of nothing when even Balagan says that being good at chess just means you’re good at chess, not at solving crimes.

But on the whole, it’s a good watch. Especially entertaining are the “thought experiments” conducted by Balagan, in which he tries to imagine the motivations of the criminals. He imagines them as pieces on a chessboard. 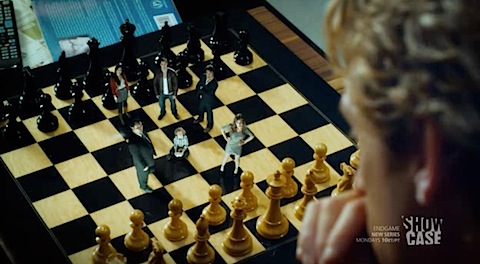 They talk to camera to explain their motivations as he sees them. He even interacts with them out in his imagined world, dressed still in his dressing gown and anything else he has on, eliminating the impossible until whatever remains, however improbable, is the solution. 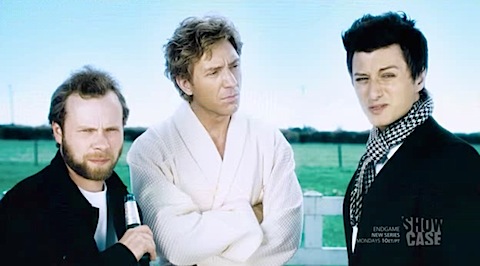 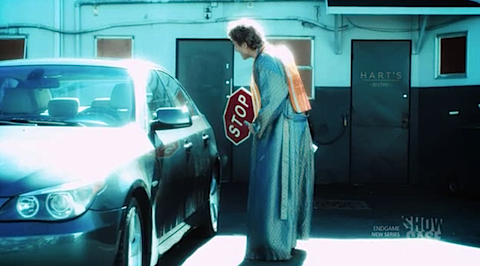 The trouble is, as episode two demonstrates, is that that appears to be the complete arsenal the writers have to offer. Watching episode two, which focused more on his fiancée’s murder, there was a decided “been there, done that” quality to the show. It also lost a lot of the entertainment value and dragged a bit. There was also little development of the characters and their relationships, with everything feeling a little shallow. We really need to care about the other characters more, who are really just plot functions waiting to help solve crimes at the moment.

So I recommend this show with cause. It has great potential – both to entertain and to quickly go flat and lose its welcome. Let’s see what happens with episode three.