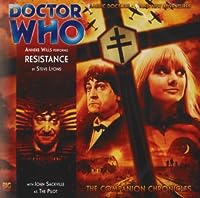 Chances are the answer to that question is either no or "Oh yes, I remember her. I’d forgotten she was there."

Back when Doctor Who was just a kiddies show (ie the Hartnell era), Polly – together with fellow companions Ben and Dodo – were the producers’ attempts to upgrade it to a family show by introducing modern, vibrant companions that the youth of today could identify with.

Yes, Polly was the Rose Tyler of her day.

A swinging 60s kind of girl, into mini skirts, screaming a lot, using nail polisher remover to kill monsters and indulging in mildly flirtatious dialogue with cockney sailors, blonde bombshell Polly managed to survive the Hartnell era and ended up accompanying Pat Troughton on his journeys through time and space, along with new arrival Jamie McCrimmon, who joined in what was the show’s penultimate, purely historical, alien-free story.

And it’s not long after that that we join her for this surprisingly good historical set during World War 2.

Plot
February, 1944: France is occupied by the Third Reich, the French Gestapo has an iron grip and the native resistance attempts to overthrow the invaders. On one quiet winter’s night, a British plane crashes to the ground, leaving a flying officer desperate to escape via the evasion lines.

Separated from the TARDIS, Ben and Jamie, the Doctor and Polly find themselves with enemies on all sides. Trapped in one of the darkest times in history, Polly discovers that humanity can be just as dangerous as any threat from outer space. She resolves to make a difference – even if it means leaving the Doctor forever…

Is it any good?
Yes. I’d probably rank it number two in the range after Home Truths. Historicals are always tricky to pull off, since they typically end up trying to be educational. Here, the reader needs little explanation of France during the Second World War so the plot is free of leaden explanatory and is able simply to tell a story.

Like the massively inferior Prisoner’s Dilemma, the way the story is told is also slightly innovative for the range, with the two actors, Anneke Wills and John Sackville, taking it in turns to tell the story until their characters eventually meet. This frees up Wills from having to do too many impressions, since she has to deal with the Doctor, Ben and Jamie at the beginning of the story, before inevitably they all get separated.

It’s well written, adds to Polly as a character (apparently, she was one) and as Polly points out, the fact the story is about the Second World War –  which was obviously still clear in the memory for anyone of her era – not only makes it far more tense than something about Cybermen or Daleks, it means the common question posed by companions about whether they can change the past suddenly becomes the more poignant, "If I’d been involved in the War, could I have made a difference?"

Did it keep my brain occupied for an hour down the gym or did I, at various points in the play, want to trap myself under something heavy in preference to listening to any more of it?
No, I was very happy with this one.

What have you been watching? Including Dear White People, Great News, Doctor Who and Silicon Valley

A mini-review of the first episode of Netflix’s Dear White People as well as reviews of 24/4/17-1/5/17’s episodes of American Gods, The Americans, Doctor Who, The Flash, Great News, The Handmaid’s Tale, Lucifer and Silicon Valley
[…]