Anyone here from the UK watch the Christmas episode of Extras? I watched the US version and I can’t help but notice that the reference to The Catherine Tate Show in the trailer wasn’t in it. Was it in the UK version or has it been deleted everywhere?

Happy New Year, everyone. Welcome to the future. My, isn’t it shiny and – oh dear – relatively bereft of new US television thanks to the ongoing writers’ strike. Oh well. What shall The Medium is Not Enough do?

Happily, there’s always British TV (oh, Father. Why hast thou foresaken me?), Big Finish plays, movies and DVDs. Depending on my omnipresent blood-pressure monitor, social engagements, how many of my limbs are broken at any one time and that cruel, merciless arbiter of life and time that we call “work”, I’m hoping to launch a couple of new features over the coming month, including “It’s in my DVD collection and it should be in yours, too”, “The Sepia-tinted Carusometer” and reviews of some of the older Big Finish plays. I’m also hoping to do episode-by-episode reviews of Primeval and Torchwood when they hit us in the faces with the subtlety of softcore gay porn that also happens to include dinosaurs. I also taped Sense and Sensibility. Maybe I’ll review that. Certainly, a review of Return to the Web Planet will be coming your way soon.

There is also the ongoing readers’ survey. So far, only a few replies – by which I mean four – which isn’t all that promising, but it has given me a few ideas. The Carusometer, for instance, is going to do less talking – how appropriate.

But come on guys, let me know what you want – if you don’t use it, you’ll lose it! I’m still sorely tempted (despite my workaholism kicking in having been exposed to today’s milligram of work) to drop it, but if another three to five people say they find it useful (they don’t even have to use their real names), I’ll keep it on. The survey will continue until the 11th and the news will continue on until then at least. 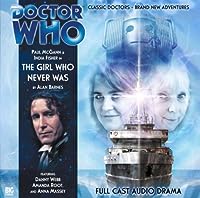 Ah Charley. How we’ll miss you. Well, assuming we’ve not been listening to any of your stories since the Divergent Universe disaster.

When Big Finish was starting up and figured it could invent a few new companions of its own, Charley was the only one of the new companions who could be described as good or popular (sorry Evelyn and Erimem fans). Enthusiastic, actually wanting to travel with the Doctor for a change and with a good chemistry with the eighth Doctor, she made even the cruddier stories tolerable. We also were treated to a precursor to the Rose/Doctor romance that was tastefully done and with a near-adult depth that the onscreen equivalent would be sorely lacking.

Then C’rizz turned up, the writers forgot how to write for Charley, the romance wasn’t so much nipped in the bud as snapped off at the root without any real explanation and the best companion of the Big Finish range quickly became a next generation Tegan or Adric.

As people have been surmising since Sheridan Smith landed the BBC7 companion gig, Charley’s days have been numbered for quite some time. Following the departure of C’rubbish in Absolution, we now have Charley’s swansong in The Girl Who Never Was. Written by her creator, Alan Barnes, it gives us more than a few reminders of why she was once so good as well as few bemusing moments that I will now coin a new adjective to describe: Bigfinishian.