Christmas is a time traditionally associated with ghost stories. I don’t know why that is – maybe it’s a pagan hangover, since “let’s celebrate the birth of our Lord Jesus Christ by scaring each other silly” doesn’t strike me as a particularly coherent Christian concept.

Probably the most famous teller of Christmas ghost stories is MR James, the Cambridge don who used to gather friends and students round at Christmas and scare them silly with tales such as Whistle and I’ll Come To You, A Warning to the Curious, The Stalls of Barchester Cathedral and Lost Hearts. These were eventually collected into various omnibuses and back in the 60s and 70s, the BBC started adapting the stories, airing a new tale at Christmas.

Initially, just one-offs, the strand eventually was formalised as A Ghost Story for Christmas, with Rosemary Hill as producer and Lawrence Gordon Clark as director. Sticking with James for the first few years, Hill strayed in 1975, getting Andrew Davies to adapt Charles Dickens’ The Signalman for the strand. She then chose to forego literary sources altogether and began commissioning original stories instead.

The first of these was Clive Exton’s Stigma (which I might deal with at a later time, if you’re lucky), but for reasons known only to the Beeb, the strand concluded with John Bowen’s The Ice House in 1978. Although BBC2 and BBC4 have repeated many of the episodes and the BFI have released some on DVD, The Ice House has never been repeated. It’s a Lost Gem.

These days, John Bowen – if he’s known for anything – is most famous as the creator of Hetty Wainthropp Investigates. However, back in the 60s and 70s, he was known for many things, especially as a surrealist and fantasy writer.

He was one of the writers of the semi-futuristic The Guardians, and contributed to the anthology series Bedtime Stories, which put darker spins on classic fairy tales, and the scary Dead of Night. After adapting MR James’ Treasure of Abbot Thomas for A Ghost Story for Christmas, he went on to write the excellent but bewildering Robin Redbreast for Play for Today.

The Ice House is an equally bewildering tale, very similar to the Jamesian style of previous Ghost Stories. In it, jaded philanthropist Paul retires to a health spa, where he finds the residents are oddly silent and quiet – unlike the brother and sister who own the spa. Or are they brother and sister?

In the grounds of the spa is an old ice house, on which grows a vine with some odd flowers:

Paul increasingly becomes suspicious of the spa, its residents and its owners, particularly when Bob, one of the staff whose hands are perpetually cold, disappears mysteriously. Then there’s the odd holes that keep appearing in Paul’s windows 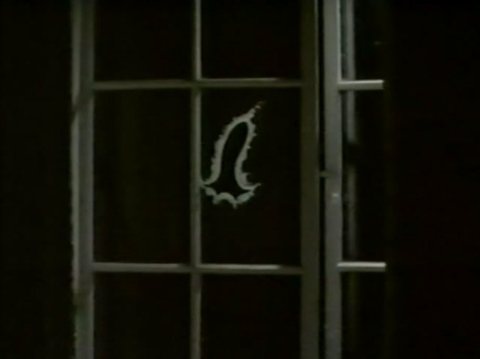 The Ice House is spooky but in an unconventional way. Like James’ stories, a lone man out in the country stumbles across an ancient and inexplicable force. Or does it find him? He investigates but the more he investigates, the more he sinks into its clutches and is unable to escape.

Here though, there’s very little explanation of what’s going on. There are no ancient documents that explain everything once the Latin translation is complete.

Clovis and Jessica appear to be linked in some way to the vines, right down to the colours of their clothing. They seem to be recruiting people who have become as jaded with existence as they are – who want to live forever but without the misery and pains of life. The ice house and the vine’s perfume appear to offer people the chance to live perfect, unperturbed lives, with the silent and empty residents being the end result of previous offers to join them.

But the story also suggests that the residents aren’t entirely happy with their lot:.

It also doesn’t appear to be a perfect process, with those who go through it taking on ice-like qualities:

Paul sees the resident again, but she doesn’t respond.

So he gives her a push:

Whether Clovis and Jessica are the incarnations of the flowers or are feeding off the residents is never explained – which is true of most of the plot.

Paul, with his distaste for the cruelty of croquet and life, is at first unwilling to join Clovis and Jessica. But the story’s eeriness is its final scene, in which Paul willingly joins them in the ice house once he realises what’s going on. 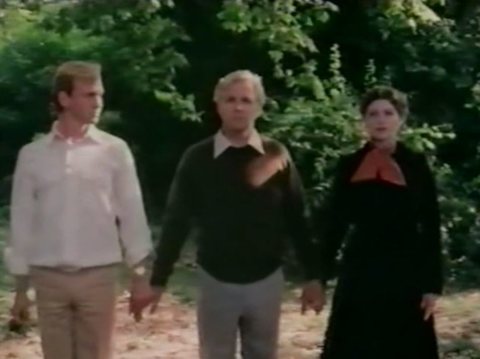 Despite being set in the-then modern day, The Ice House feels Jamesian in its dialogue and performances. Paul, Jessica and Clovis* all talk in a literary, precise manner and the spa owners have an other-worldly quality to them that sets them apart.

In many ways, though, The Ice House feels more unsettling than the James adaptations – although still can’t hold a candle to the superb The Signalman – since it doesn’t fall back on ghosts or demons. Instead, it’s a horror story, expressing horror of nature, horror of life, and horror of the flesh.

The direction and music are equally subtle and unsettling, although Derek Lister took over from Lawrence Gordon Clark for the first and only time in the series.

Time to petition BBC4 for a repeat this Christmas, I think.

* Played by the late Geoffrey Burridge, who went on to a similar role as Dorian in the Blake’s 7 episode Rescue

A review of the Doctor Who episode Hide
[…]

The Wednesday Christmas Play: A Warning To The Curious (1972)

The Wednesday Christmas play is A Warning To The Curious
[…]