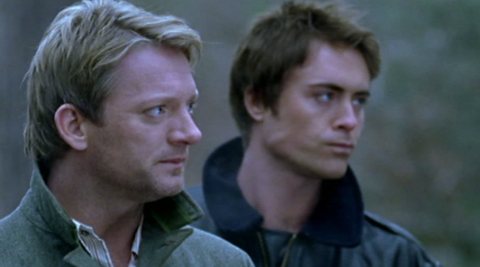 In the US: Probably BBC America at some point, but not acquired yet.

Normally, tuning into ITV1 on a Saturday night is about as appealing as swigging back a family fun-sized bottle of sulphuric acid (aka anything you’ve bought from Threshers). But then, before Doctor Who turned up, the same was true of BBC1. Now, Saturday is where it’s at.

ITV has noticed this. Never ones to come up with an idea of their own if someone else’s will do, the powers that be have decided that if coming up with family-friendly sci-fi worked for the Beeb, that same idea can be ‘borrowed’ and made to work on ITV1 as well — after everything’s received approval from 17 focus groups, five sub-comittees, two consultants and a man specially hired just so he can be fired if it all goes wrong, of course.

But just as The Tomorrow People, ITV’s ‘answer’ to Doctor Who in the 70s, turned out to be something completely different and acceptable in its own right (until the puppets turned up), so Primeval isn’t simply Doctor Who with the TARDIS serial number filed off.

Plot (inspired by the TV.com synopsis)

Primeval follows Professor Nick Cutter and his team as they investigate anomalies in time found in the Forest of Dean. An unfortunate side-effect of the anomalies is that dinosaurs are moving through them and into the present time, making the team’s investigations that much more stressful. Cutter’s wife also disappears while investigating the anomalies and he makes it his mission to find and save her.

I was pleasantly surprised. Not half bad, in fact. Even without the usual “this is aimed at kids” visor placed lightly over my eyes, I didn’t feel physically violated by watching it, which is very much a bonus with any ITV1 drama.

Clearly, nothing makes a whole lot of sense. No one goes “Bugger me, not for all the tea in China could you get me through a wibbly wobbly time thingy that could disappear at a moment’s notice or turn me into tapas immediately.” No one says, “Crap it, there are giant dinosaurs out there. Shall we reload with rocket launchers or just stick with these low-calibre machine guns?” No one wonders why, when venturing back millions of years to the time of dinosaurs, they only send one army guy with the most important person in the immediate vicinity. Or why, with all the Earth to pick on, the dinosaurs plump for the Forest of Dean. Why not make it Bognor or the Sahara or the middle of the Atlantic Ocean?

So as many holes in the plot as there are in the space-time continuum, apparently. But things move along quickly enough that most of the time, you can’t spot the problems – you’re always at least four obvious flaws behind so at least you get to enjoy the nonsense as it’s happening. Strangely, the slightly rubbish chase scenes were the points in the show where it dragged the most. Maybe those are the bits the kids are supposed to enjoy?

The various characters who make up our team of intrepid time explorers make no sense either. We have Douglas Henshall playing Nick Cutter, “professor of hufnalfufn…” What was that? “Professor of mumbledon’tmentionitarchaeodinopalontologyoldstuff”.

Let’s just call him a professor cos it sounds impressive and hope no one asks of what. It’s probably “wee timorous beasties”.

Anyway, his hobby is chasing after his missing wife, who either

Henshall’s great. He’s a fantastic actor, right up until the point he has to talk absolute bollocks, which is roughly the point where he stops being able to keep a straight face. He’s not helped in having to explain the bollocks to ‘sinister’ government official Ben Miller, who doesn’t so much prowl around as prance. I imagine on all Henshall’s reverses, Miller’s doing Roger Moore impressions or something, because Henshall really can’t cope with him.

The rest of the adventurers are more there to keep the demographic numbers up than to have any serious plot relevance. We have Hannah Spearritt, who despite being 32 or something by now, looks about 12 and appears to have come direct from the set of Lord of the Rings where she was playing “elf princess”.

She’s supposed to be a reptile expert. That’s handy, isn’t it? No. They’re dealing with dinosaurs. I have happy predictions of yet more running around, chased by a diplostega rex, going “But I thought it was an iguana” for the next five episodes, which was pretty much her job this time round. The show might be different, time may have moved on, but companions are archetypes that seem to live with us forever.

We then have a conspiracy-theory loving student (Andrew Lee Potts), who thoroughly deserves a de-pantsing. Quite who he’s designed to appeal to, I don’t know. Probably the same sort of women who write to serial killers in prison.

Exciting as Douglas Henshall is, he doesn’t seem very action adventure, so there’s James Murray as Stephen Hart – a man built entirely of testosterone, but with a sense of humour cunningly left of the construction plans. He does lots of action scenes, which given he’s supposed to be a teaching assistant is slightly surprising. Some kind of TA weekend warrior who does Ray Mears courses during his lunch breaks? Maybe they’ll give him a personality next week.

Almost as important a part of the cast are the dinosaurs. They don’t look too bad, although there is a touch of the Ray Harryhausen to them when they walk. Never, however, do you feel as though they’re the slightest bit real. Maybe kids do? Blind kids? Blind kids without ears? Okay. They’re not great. BBC1 aspirations on an ITV1 budget. Oh dear.

Still, it was all enjoyable, all rather thrilling in a retro sort of way. The ongoing “what’s it all mean?” arc is intriguing. Quite what Dougie’s wife is playing at is something I’d like to find out about. The incidental music is Mozart compared with the horror of Murray Gold’s Who tunes. And maybe that irritating kid will finally get eaten by a T Rex. And with my visor firmly in place, I liked it.

Definitely worth sticking with, if you don’t mind your sci-fi a little bit vacant-headed.

If you missed it or are in the US, you can watch the entire episode in 10-minute lumps over on YouTube. And here’s the trailer for it.