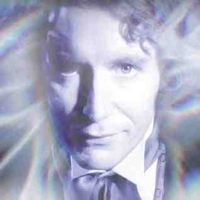 Ring any bells with anyone?

Yes, it’s standard Doctor Who plot #3. It worked for countless episodes of the old series (Image of the Fendahl, Curse of Peladon, The Dominators and just about anything else you care to name) and it’s readily deployable to the halfway house between old and new Who that is the Big Finish universe.

The question is, did you feel the fear?

Plot (imported from another universe’s Big Finish web site, where the laws of copyright are different)

The TARDIS lands on Phobos, moon of Mars – where extreme sports nuts of the future indulge their passion for gravity-boarding and wormhole-jumping. But there’s something lurking in the shadows, something infinitely old and infinitely dangerous. It’s not for nothing that ‘Phobos’ is the ancient word for ‘fear’…

Not bad. Paul McGann was good. He can be quite impressive when he wants to be (cf the ITV1 Hornblower stories) and he’s definitely hitting his stride now. Sheridan Smith didn’t have much to do and spent most of it giving her patented screech, but she’s still just the right side of the interminable bickering that was Peri – The Middle Years. The guest cast is okay, although the characters they play lack anything to really interest you in them. I can’t put my finger on why though.

The story itself has resonances with a certain two-parter from the second series of new Who, so it feels less than original, although it does manage to create a slight atmosphere at times. The decision to make Phobos an extreme-sports moon for the purposes of the story, while imaginative, was probably a bad idea as far as making a scary story is concerned, since the idea’s a little too comical to sit well with the scary beastie that drives the narrative. It’s a problem Big Finish stories suffer from occasionally, backing off from full on seriousness with an ironic chuckle to themselves, now and then. While that does mean the producers can remain too cool for school, it also means that we’re never really frightened or drawn into the story.

We’re getting this problem with the plot arc for the whole season, with the Headhunter nothing but a bad joke rather than a terrifying unstoppable assassin. When the time comes for her to appear in the main story, we probably won’t be able to take her seriously.

To sum up: a little bit forgettable, but a good one for traditionalists.

Listen to the episode (RealPlayer – only until Sunday 3rd February 2007!). You can buy it on CD from the Big Finish web site from May.

A review of the Big Finish Doctor Who Companion Chronicles audio play The Great Space Elevator, read by Deborah Watling

Thursday’s news if you can see it.