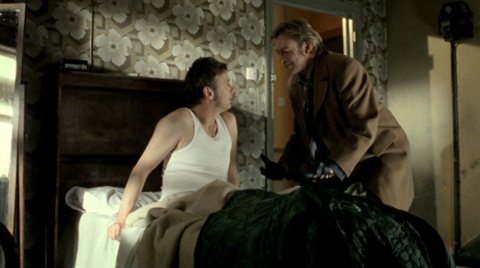 In the UK: Tuesdays, BBC1, 9pm with the following episode on BBC4, 10pm

In the US: Coming to BBC America later in the year. With edits again, probably.

It’s always a tricky thing reviewing Life on Mars. Can you praise/slag off an hallucination? Is it even an hallucination or is it regular drama with a sci-fi twist? Until the end of the series, we won’t know.

So I’m going to tread my way gingerly, here. First, I’ll lay my cards on the table and say I don’t think the first two episodes were quite as good as last year’s cracking crop. I think it’s now playing to the audience a bit too much and crosses from parody into self-parody a bit too often.

Sam Tyler is a driven and ambitious young detective who is determined to keep the streets of 21st Century Manchester safe. But after a near fatal car accident Sam wakes up, dazed and confused in 1973, struggling to understand what’s real. Has he gone back in time? Is he in a coma? Or has he simply gone insane? He must come to terms with an unfamiliar environment and an archaic CID unit where, using his modern know-how, he is integral to the unit’s investigation process as he learns how to adapt to their old-fashioned technologies and etiquette.

Regular viewers, according to the production team, wanted more of the same. And they’ve got it. Trouble is there’s not been any character development as a result. Sam is still rolling his eyes at the behaviour of his boss, Gene Hunt; Gene is still unreconstructed as hell. You’d have thought they’d have come to some sort of accommodation by now, some kind of shorthand rather than the same old arguments as always. Maybe they’d have even learnt a little from each other.

True, episode one has a role reversal of sorts with Tyler wanting to fit up a suspect he knows is guilty and Hunt, faced with the glare of public scrutiny, wanting to do everything by the book. But Hunt is doing it under protest and Tyler because he knows the future and can’t possibly convince anyone else. Neither has actually changed, and by the end of the first episode, the natural order of things is restored. This makes them both less and less plausible as characters, and more and more lad mag role models.

Playing to the audience, the production team have also upped the Gene-isms count. He has fewer lines of normal dialogue this year: they’ve been excised in favour of Gene-isms. They’re also recycling last year’s Gene-ism. They know that we loved “Halt! You’re surrounded by armed bastards!” last year, so they throw it back in again to considerably diminished effect.

If the events of the show are anything other than an hallucination, then the production team have lost contact with reality as well. Of course, with the second episode written by Chris Chibnall of Torchwood fame, we shouldn’t be too surprised by this: I’d go into more detail of just how many ludicrous things happen in the second episode but there are those of you without BBC4 out there, I know. Let’s just say, although it was light years ahead of any Torchwood script in terms of quality, there were very few scenes in it that rang true.

The show’s just a bit too knowing now, too much based on the idea of The Sweeney, rather than The Sweeney itself or 1973 proper. Every scene is bursting with 1973ness: every brown is browner, every hairstyle is longer, every car is a classic of its time, not a generic Austin. Even 1973 wasn’t so 1973.

This is all coming out a bit harsher than I meant it to be. Life on Mars isn’t too serious a programme. It’s a laugh. It has a great cast, although I’m not wholly convinced of Liz White’s acting skills – I think she may just sound wooden, just as some people are afflicted with a sarcastic tone of voice. We can forgive it its anachronisms (“Follow the money” was a phrase invented for Deep Throat in All The President’s Men, which wasn’t released until 1976, for example, although Gene Hent could have invented it, of course) because it’s just so hard to do historical unless you’re Patrick O’Brian. There’s some great dialogue and direction. It can be surprisingly scary whenever it dwells on the possibility that Sam is defenceless and trapped in a coma back on a hospital bed in 2006 and events become more dream-like. And it does recapture the adrenaline and fun of The Sweeney.

It also does us the valuable public service of reminding us how rubbish the 70s were to live through, particularly if you were facing casual and socially acceptable prejudice for being black, gay, a woman… The theme tune is still pants, though.

As if that weren’t enough, it also makes you think. Working out just what is happening to Sam is half the fun. My slight worry is that it’s just not possible any more to accept that he might truly be in 1973 for some reason (think Somewhere in Time, as a possible explanation). Despite the injection of an intriguing arc that suggests Sam may have been sent back from 2612 or some other time and has simply forgotten about it, it’s hard to believe now that this 1973 is anything other than madness or an hallucination. That ambiguity is disappearing, fast.

So still definitely worth watching, regular viewers. There are only a couple of changes in the first two episodes and they’re not especially big.

New viewers, you can join in at any point but it’s worth getting hold of the box set of the first series if you can.

Oh, screw it. Just watch it. You won’t regret it. It’s really good. It’s just not quite as good as it was last series.