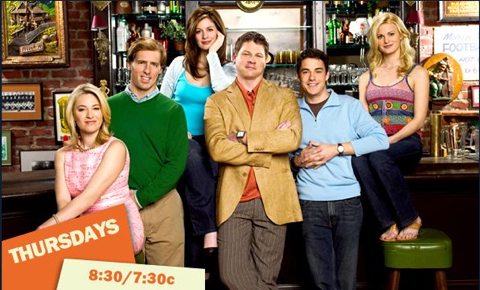 Ah, yes, a searing drama, looking at the dark side of relationships and the human condition as men and women plunge into depressions, misery and self-destruction caused by the terrible emptiness of existence.

What? This was supposed to be funny?

Henry moves with his girlfriend Heather to Chicago (what’s with all the Chicago shows all of a sudden?) to start a new life. However, she decides to start the new life without him. So in the space of a day, he’s suddenly single, jobless and homeless.

Fortunately, Larry, who lives in the same building, needs a new roommate because Brad is moving out to be with Amanda. Larry first introduces Henry to ‘Happy Hour’, a hallowed time of the day when men drink Martinis. He also introduces him to Amanda who gives him a job at her firm. And then sleeps with him. So suddenly everything’s looking right again for Henry.

Not to be flippant, but the way to enjoy this show is to block out the sound of the studio audience, forget the fact it’s supposed to be a comedy and imagine you’re watching something bleak by Ibsen. This is really a drama about people – well, men really, since the women are little more than cardboard cut-out plot-advancement devices, with characterisation that consists mainly about bemoaning how fattening pizza is, how awful it is to be single and how they want what they can’t have – who have bleak, empty lives, who have their dreams crushed and their soul corrupted by the big city. If you watch it like that, it’s great.

On the other hand, if you watch it looking for some laughs, oh boy will you be disappointed. I think I did actually laugh a bit in the last five minutes, but other than that? Pants. All the standard problems with standard US sitcoms are at the fore: everyone acts according to standard rules of sitcoms, people try to get the biggest laughs with the bitchiest lines, women and men hate each other – men don’t understand women, women just want to exploit men – blah, blah, blah.