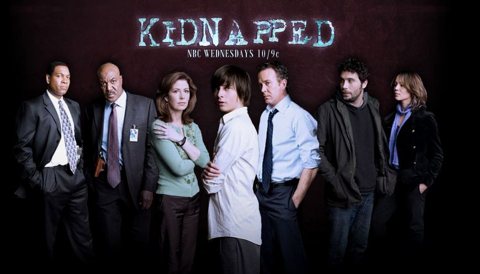 Until now, NBC has more or less resisted the temptation to steal other networks’ ideas for programming. Until now.

Here’s its attempt at 24. It’s actually not half bad. They’ve captured (I’m good with me puns, aren’t I?) most of the things that make Fox’s Jack Bauer power hour so good: the tension; the serial aspect, with each episode following on from the previous; the “police procedural” tone that in no way comes close to the actual way police do work; and the utterly ridiculous plots. But it doesn’t quite have the edge required to make it unmissable.

The plot
I won’t both spelling out the plot too much, since the title pretty much explains everything. But the basic outline is pretty much the same as Proof of Life‘s.

The son of two very rich people (Timothy Hutton and Dana Delaney) is kidnapped. They bring in an expert rescuer (Jeremy Sisto from Six Feet Under). But the FBI (Delroy Lindo and Linus Roache) find out about the kidnapping and involve themselves, and everything falls apart.

But does it work?
Well, it’s more realistic than 24, which is probably its undoing. 24 lives in a preposterous, Saturday morning serial, Fox News parallel universe. You leave your brain at the door when you watch it. Kidnapped, however, tries to be realistic, but is only “TV realistic”.

For example, the upper-middle class New Yorkers speak French in front of their housemaid and bodyguard when they don’t want them to hear their fights or secrets. Cos French is posh in TV land. And if they have a maid, they must be rich.

Yet, anyone capable of getting a $20 million ransom together is going to have at least a cook and a housemaid; and they all speak Thai these days to prevent servants eavesdropping, since French is a relatively well known language that many people learn in school. Also, these particularly hateful, punch-worthy posh people have perhaps the worst accents I’ve ever heard – I had to read the subtitles just to find out what French words they were trying to use.

Maybe that’s how they actually keep secrets from the servants: speaking French so badly only they can understand each other.

I won’t even start on the Spanish used later in the episode.

Then there are the ‘FBI procedures’. I’ve watched cop films and shows; you’ve watched cop films and shows. We all know that the first thing kidnappers do is ditch the suitcase which has the ransom in it in case there’s a tracker or some kind of dye thing that makes the money useless. Then there are those tracking devices that look like bank notes that you can camouflage in the bundles of other notes.

The FBI of Kidnapped doesn’t know about any of these things. It believes in great big black tracking devices with red flashing lights on that you just stick in a pocket of the briefcase. They’ve never seen that thing in movies where the kidnappers’ HQ is wired with explosives and it’s all a trap.

But the kidnappers aren’t much brighter. Every self-respecting kidnapper knows you give plastic cutlery to your abductees, rather than metal knives. That’s just asking for trouble.

So, essentially Kidnapped isn’t yet exploring any new territory. It’s a show for people who’ve either never seen any other cop shows or who like to be on firmly comfortable territory. It’s such comfortable territory that FBI agent Delroy Lindo is just about to retire (cf Lethal Weapon, Se7en), but decides to stay on for this one last case. Who wants a bet he either dies or joins up with Sisto in the final episode of the season?

What about the actors?
The cast is pretty good. Jeremy Sisto is a fine lead role, even if his mumbling begins to grate after a while. Also, he used to be in the FBI, he’s been to college, got good grades and worn a suit for years. A hoodie is an affectation after that. At the very least, he could change outfit between kidnappings.

Delroy Lindo hasn’t yet hit his stride and spends his time arguing with his less capable colleague to prove he’s the Wise FBI Guy That The Outsiders Can Trust. I’m sure he’ll be a good counterpoint to Sisto come series, though.

Token Brit Carmen Ejogo (Roache is faking a US accent) does well with a slightly pointless, helper role. The producers should be credited for acknowledging her Englishness while managing to avoid giving her lines about tea and cricket. Mykelti Williamson does well with his limited onscreen time, a role that should hopefully blossom into something better come episode two (or not. Can’t say too much at this point, to avoid spoilers). Doug Hutchinson (The X-Files, John Doe) does his usual sterling job as chief villain.

Hutton, Delaney and co are all a bit pants though. And other than Hutchinson, there are just so many villains, they only ever get about a minute to do anything. Most of them don’t bother doing anything with their minute, however.

Thumbs up or down?
I can see this one potentially getting better. It is quite suspenseful and Sisto has magnetism. If the plots can get smarter than this initial tone-setting episode suggests, it’ll be a good alternative to 24. If not, it’ll be just another cop show.

Incidentally, each episode of Kidnapped is going to be a separate day and each season, NBC says somewhat optimistically, is going to be a different kidnapping. I’m guessing the kid doesn’t get killed in the first few episodes then.

You can watch the trailer on the NBC site.

“Why are my feet so cold?” Wednesday news

This new “no-torture” policy of Jack Bauer’s wasn’t his real intent at all! He was just rusty. In case you missed it, Monday’s episode saw 24‘s Jack Bauer threatening to cut someone’s eye out unless […]

What have you been watching? Including The Night Shift, Godzilla, Penny Dreadful, Enlisted and Silicon Valley